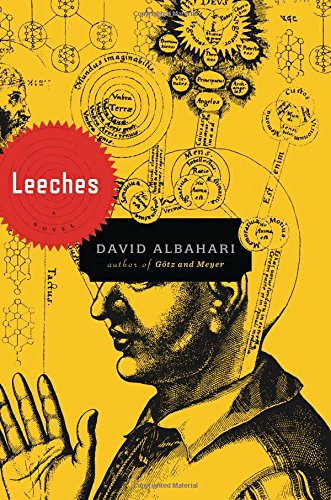 The 2011 air war to save civilian lives that our country and its NATO allies are conducting in Libya is not without precedent. In 1998 the same alliance went to war against Serbia to protect the lives of the latter country’s ethnic Albanian citizens in Kosavo. The same ultra-nationalist Serbian government had already committed mass murder and other war crimes against civilians in other parts of the former Yugoslavia.

David Albahari’s challenging yet engaging, cerebral, magical-realist, experimental, post-modernist novel Leeches provides a portrait of life in Belgrade, capital of an ideologically charged and xenophobic Serbia, in the months preceding the NATO bombing campaign. As elsewhere in history, Belgrade’s Jewish community is the proverbial canary in the Serbian coal mine; considering the Serbian government’s behavior toward other former Yugoslav republics and their ethnic groups, this should not be surprising.

Prospective readers who browse a copy of Leeches in a bookstore may be intimidated; the text comprises a single 309-page paragraph consisting of the narrator’s stream of consciousness recollection of the events that would by the book’s end lead him to leave his homeland for a life of exile. Readers who are not intimidated will find the pauseless narration compelling and engrossing—providing they do not harbor prejudices against liberal intellectual baby boomers who came of age in the 1960s. Moreover, the narrator is as much a novice to higher mathematics and Kabbalistic concepts as the reader may be, so the latter is never made to feel stupid.

Mr. Albahari’s unnamed narrator is a single, male, gentile op-ed columnist who spends his abundant free time chatting and smoking marijuana and hashish with his jaded, skeptical best friend Marko. Mr. Albahari does not mention the narrator’s age, but more than half way through the novel we infer it from his description of female classmates at a reunion about whom he remarks, “There is nothing more beautiful than middle aged women.”

At the outset of the novel while strolling along the Danube our protagonist witnesses a woman being slapped by a man. While unsuccessfully attempting to follow the woman he notices a geometrical symbol appearing at various locations. A few days later he sees and replies to the following cryptic newspaper classified ad: “Sometimes a slap can change the entire cosmos” and receives a manuscript that magically rewrites itself every time he opens it.

The manuscript, entitled “The Well,” is a history of the Jewish community of Belgrade and Zemun, its sister city across the Danube, with digressions that discuss the above mentioned Kabbalistic concepts such as the ten sephirot or emanations of the divine, the relationship between God and His female aspect and consort the Shekhinah, and the Lurianic belief that ascribes mystical power to the meticulous observance of Jewish law. The title of the book refers to the fact that one of the livelihoods of local Jews in the 18th century was gathering and selling leeches, which thanks to medical practices of the time were a precious commodity. It may also refer to the antiSemitic charge that Jews are leech-like parasites to their host societies.

To decipher the geometrical symbol the narrator enlists the aid of a high-school friend who is a professional mathematician, and to understand the manuscript he consults a group of local older Jewish men (one of whom turns out to be the father of the woman who was slapped) whose drug of choice is alcohol and can better hold their liquor than can our hero. He also starts devoting his columns to denounce antiSemitism, which gets him beat up by members of an ultra-nationalist group that enjoys the sympathies of the government, and also results in the defacing of his front door with antiSemitic graffiti and the frequent placing of feces on his doormat. Our hero’s state of mind becomes increasingly paranoid, no doubt exacerbated by cannabis, except that there are indeed people who mean him harm.

Moreover because he is frequently either stoned or intoxicated, he admits that he himself is an unreliable witness for whom the manuscript and its mystical content become a distraction from the reality of political current events. “Now I realize that I was actually evading talk of reality and that everything that happened to me during those spring months six years ago—plunging into the shadowy world of mystical phenomena—was a form of self-deception, a form of solace, or more precisely, escapism from our reality at the time.”

Sixty-four pages later he continues, “Reality had reached a mind-boggling degree of ugliness: we were living under a dictatorship pretending to be a democracy, which was closing in ever more tightly around anyone who dared voice a divergent opinion.”

The response of some Belgrade and Zemun Jews to the increasing antiSemitic violence is to try to apply Kabbalistic practical magic to invoke divine protection. “The Well” describes one of the original Jewish settlers as “a young but wise man named Eleazar, a ‘mystic and a teacher,’ . . . who arrived in Zemun in 1739.” When our hero asks his new Jewish acquaintances why they require his participation in their mystical endeavor they reply that he has a pure soul, indeed, the reincarnated soul of Eleazar, a notion he does not dismiss out of hand.

But as his paranoia increases he wonders, “Had I allowed myself to be drawn into a game in which I was by no means in control, as I’d thought I might be not so long ago, but rather an auxiliary piece, a pawn someone was skillfully moving while the pawn was certain that the choice of moves was his alone?” In the end the narrator and his Jewish friends’ best efforts cannot prevent the murders of at least two people and his own eventual exile.

Among the joys of this novel, which the above plot summary does not convey, are its intellectual digressions. Two favorites may indicate to the prospective reader on the one hand whether you have the intellectual inclination to take on this demanding fictional opus, or whether this book constitutes pretentious erudition for its own sake. In the first excerpt the speaker is the protagonist’s mathematician classmate; and in the second we return to the voice of the narrator.

“At the beginning of the last century, Helge von Koch, a mathematician, found a curve that was infinite in circumference, yet enclosed in a finite area. This would mean, at least in theory, that you could pick it up and put it in your pocket, which would mean that the pocket would contain infinity. You could put it in an envelope and send it to someone who wanted infinity or who hadn’t yet had a chance to see it. The Koch curve is made by dividing the given segment of line into three equal parts, and then replacing the middle part with the sides of a triangle in such a way that we get four segments, of which each one is equal to one third of the original segment. By repeating this procedure, one gets Koch’s curve, and if we start with an equilateral triangle and apply this procedure to all three sides, we will arrive at what is called the Koch snowflake, which some call the Koch star. What is of particular interest here is that the first shape formed in the opening of the triangle is a six-pointed star, and though the sides may curl, if I may put it that way, they retain a recognizable six-pointed shape. At one moment it may assume the shape of a circle, which means that, in a reciprocal process, a circle can be turned into a six –pointed star. It is here somewhere that the explanation of the sign you showed me several weeks ago is hidden. So triangles can open, perhaps they have already started to do so, and the one thing that must not be forgotten is the point. I know there is no dot on the above-mentioned sign, but if you can’t see it, it doesn’t mean it isn’t there. Apparently with his curve Koch intended to demonstrate the limitations of classical mathematical analysis, which shows that sometimes a single snowflake can cause more trouble than an entire snowstorm, and that’s the way to look for the missing dot. In other words the opening of the triangle leads to the rediscovery if a point that I would gladly call the Borges Aleph, but it is at the same time both more and less than that. So let’s never forget that everything, even the infinity you have put in your pocket, must in the end come back to the point from which everything emerged.”

“I opened the manuscript to page 110, and in the left corner read that Eleazar had once been angry at God and told him he had seen through his explanation that it had not been possible to create a perfect world because in so doing he would have been making a copy of himself, in which case there would have been two identical gods, and if there could be two, why not three or four? You are talking in vain, Eleazar upbraided God, you should at least know that the truth cannot be hidden. A perfect world was not created because in a perfect world there would no need for any god, not for one, not for a whole multitude, ranted Eleazar, or else the world is perfect because the evil is as much yours as the good is, just as night and all its living and not living creatures are as much yours as the day full of radiance and serenity, then in that scheme of things you appear as someone who can offer protection, though in moments of great testing you hide like a bashful bride or a child who has broken a bowl and, fearful of being punished, points at whomever is standing nearest him. There was no indication as to whom Eleazar had in mind, who was bowing down under the weight of God’s index finger, because the fragment, as kept happening with the manuscript, turned into a copy of a document of the Royal War Council of November 1781, communicating the emperor’s will that the Zemun Jews, like all the Jews in the empire, would be allowed to use their language for religious services, but that within two years’ time they’d have to expunge it from their business ledgers and documents, including their wills and contracts drawn up for regulating business. I closed the manuscript and opened it again to page 110. The part about Eleazar was still there, but it was up in the right-hand corner and it melted into another text, a document on the relationship between God and the Shekhina.”