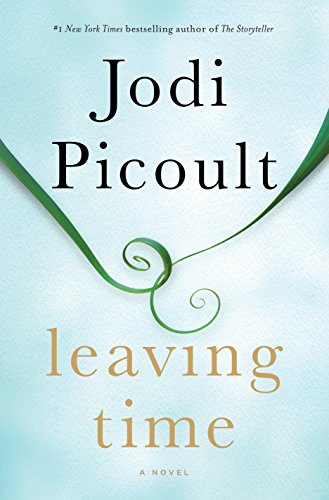 “. . . the writing and storytelling compelled the suspension of disbelief and acceptance of the unimaginable. And in the end an amazed and admiring gasp—‘I did not see that coming.’”

Fans of Jodi Picoult know you can rely on her to craft a thought provoking story, captivating characters, and a layered plot that ventures just deep enough into complex waters to hit the sweet spot between commercial and literary fiction. In Leaving Time, there are many strengths in Ms. Picoult’s nuanced writing and well-researched storytelling.

Like many of Ms. Picoult’s novels, Leaving Time is told from multiple unique points of view—13-year-old Jenna; her mother Alice; a pink-haired psychic named Serenity; and Virgil, a has-been-detective. Sometimes shifting points of view can belabor a story, but in Leaving Time transitions from past and present and one point of view to another flow seamlessly as this mysterious and often heartbreaking story unfolds.

Thirteen-year-old, Jenna Metcalf is a wise-beyond-her-years “old soul.” A loner, she lives with her grandmother and methodically searches for her mother, Alice, who disappeared ten years ago after a freakish accident at the family’s elephant sanctuary. Jenna refuses to believe that Alice abandoned her, in spite of her grandmother’s indifferent admonitions to let Alice go. Instead, Jenna steps up her search, combing missing person’s sites on the Internet, scrutinizing her mother’s old journals for clues, and enlisting the help of Serenity and Virgil.

Alice is introduced mostly through her scientific personal journals and Jenna’s fragmented memories. In the journals, Alice’s acute, scholarly examination of the protective maternal instincts and grief of elephants, serves as a lens into her most intimate thoughts and feelings about motherhood and her own life. One of many ambiguities as the story progresses is just when Alice wrote her journals.

The scholarly details of elephant behavior are made more palpable because in her fascination and love for the elephants, Alice imbues them with human characteristics and emotions, making them distinctive personalities. Occasionally, the scientific detail borders on tedious, but more often it is provided in manageable nuggets that skillfully deepen the central themes of mothers and daughters and loss.

Serenity, a once famous, now discredited psychic, and Virgil, an alcoholic-has-been private detective, add layers of sarcasm, wit, and intrigue with their often jaded points of view.

Ordinary life and the spirit world overlap and collide, as does who and what is real versus mystical or imagined. Even for someone who is not usually a fan of ghost stories and mysticism, the writing and storytelling compelled the suspension of disbelief and acceptance of the unimaginable. And in the end an amazed and admiring gasp—“I did not see that coming.”