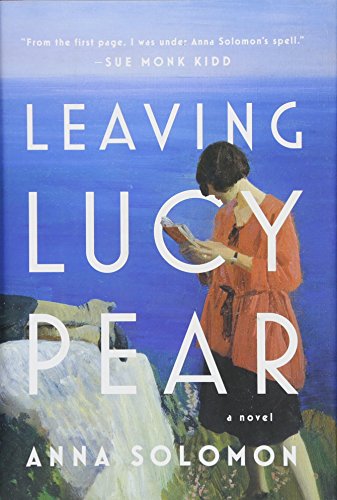 An eighteen-year-old Jewish Bostonian from a wealthy family gives birth out of wedlock in 1917 at her uncle’s house in Cape Ann. Rather than turn the baby over to the Jewish orphanage at night she leaves the child at the foot of a tree in the pear grove on her uncle’s property where an Irish-Catholic family steals pears every summer. As she hopes they take the child and raise her with their other eight children. A decade later the birth and adoptive mothers are brought together and recognize the missing pieces from the puzzle of the child named Lucy Pear’s biography.

The well-crafted chapters—some could stand alone as short stories—are handsomely written in sometimes poetic, somewhat formal and reserved prose Solomon’s readers will recognize from The Little Bride. At various times Bea and her social climbing mother Lillian are referred to as standoffish, and the same could almost be said of Solomon’s prose style, as if the language were trying to maintain an aesthetic distance from the characters and their interwoven narratives. Moving between chapters and their distinct narrative threads can sometimes feel disorienting, but the novel’s slow pace pays off in well developed characters, though our author often tells where she might have showed.

Solomon, who was born and raised in Gloucester, captures Cape Ann’s natural and social topography. Here is a descriptive and imaginative lyrical passage:

“At night, when the logic was swallowed, when the gravel paths grew spectral and the pines rose up like a mountain range, a different pleasure worked at him. The barks of harbor seals sounded like feral dogs roaming the plain. A cat in heat became a moaning puma. Coyotes howled themselves into wolves, raccoons clawed themselves into boars as they ransacked the gardener’s compost heap.”

Henry, Lillian’s husband and Bea’s father, owns Haven shoes, a business that includes a factory and retail stores. Henry has anglicized the original family surname Heschel to Haven, while Henry’s journalist brother Ira, who married into wealth, changed it to Hirsch. Lillian is trying to ingratiate herself in Boston’s Protestant elite social circles and introduces Bea to her friend’s naval lieutenant son who impregnates her.

Bea is a talented classical pianist who has been accepted to Radcliffe College. She discreetly gives birth at her Uncle Ira and dying aunt Vera Bent Oakes’ home on Cape Ann’s eastern point (south of Gloucester) the summer before her classes start. Six weeks into her first semester she suffers a nervous breakdown and has to withdraw. She had hoped to marry her first cousin Oakes Hirsch, but her pregnancy and subsequent mental health doomed that wish, and when he returned from WWI he married someone else. Bea eventually enters an unconsummated marriage of convenience with Albert Cohn, a gay man.

When her mental health recovers sufficiently Bea becomes a temperance activist, which is further evidence of her assimilation; like Catholics, Jews tended to oppose temperance, which was a Protestant cause. First Bea forecloses the opportunity for her baby to be adopted by Jewish parents, and now she devotes herself to a Protestant social movement with xenophobic overtones.

Bea also becomes a family planning advocate and educator, and it is in this role that she first meets Emma Murphy at the latter’s front door in Lanesville (northwest of Rockport) on Cape Ann’s north shore, providing her with the address of a clinic where she can acquire a diaphragm. Emma’s fisherman husband Roland alternates between long periods of work away from home on a fishing ship and equally long periods of unemployment when he abuses Lucy Pear, who dreams of escaping to Canada to live with her older brother Peter.

While Roland is away Emma begins the affair with Josiah, a quarry manager and mayoral candidate who, noticing how hirsute, prematurely pubescent, brown eyed and curly brunette Lucy Pear does not resemble her straight haired, blond, blue-eyed siblings, assumes she is the product of a previous adulterous relationship.

Josiah gets Emma a job as a home care attendant for ailing Ira so that Bea will have time to campaign and ghost write speeches for him (and deliver women temperance voters) and hires the Murphy children to work in the quarry whose adult workers are agitated by the impending execution of Sacco and Vanzetti. While working in Ira’s home Emma realizes that Bea is Lucy’s biological mother.

This review will not reveal how Solomon resolves her interwoven plot threads. The somewhat rushed ending, though probably not predictable to readers new to Solomon’s work, is somewhat reminiscent of the final section of The Little Bride, and readers will probably be divided as to whether it is satisfactory. Leaving Lucy Pear is recommended to readers who enjoy historical fiction, a cast of well developed mainly female characters, and handsome prose.