Leave Me: A Novel 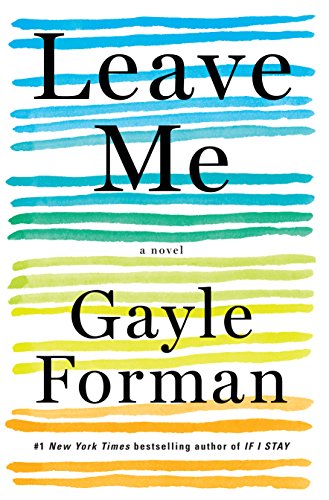 “Would it surprise you to learn that one of the top fantasies for women is a prolonged hospital stay?”

Maribeth Klein doesn’t get that prolonged stay when she goes to the hospital with a heart attack, and that’s only one of her problems.

Gayle Foreman’s Leave Me is an urban fairy tale for the exhausted modern woman. Maribeth is married, employed, and the mother of feisty four-year-old twins. She is solely responsible for scheduling her family and upkeep of their home and lives. Her mother is an irritant and a worry. The job that was supposed to be part time, no weekends, has morphed into a time eating behemoth.

With that type of daily stress, is it any wonder that she experiences symptoms of a heart attack and ignores them for days?

After an emergency bypass, the fabled hospital stay turns out to be just a couple of days, and the help her doctor says is essential is nowhere to be found. Husband is still helpless, mother is worse than ever, and kids are clueless. It’s only a matter of time until Maribeth’s physical and mental breakdown will be complete.

She solves her problem in modern fairy tale fashion: She withdraws nearly thirty thousand dollars from her account and does a runner to her home state of Pennsylvania. There she lives the simple life: eating good food, getting lots of rest, reading, and interacting with the cute hipster couple upstairs. Oh, and canoodling with her new doctor.

Gayle Foreman hits most of the right notes with her latest novel. Her writing is tight and funny at times. “‘You’re paying with cash?’ She [doctor’s receptionist] looked at Maribeth as if she’d just announced she would be paying with Pokemon cards.”

Maribeth has a wry way of looking at things that illuminates how she could have found herself in the predicament that precipitated her heart attack. She looks for the funny and the positive in most situations. This, more than anything, makes her a sympathetic heroine, and makes her getaway acceptable even when many readers can only dream of being financially able to make such a run.

In this era of continual debate over division of labor in a marriage, many female readers will likely see a version of their own lives played out in Maribeth’s story. Foreman is clearly on the side of her protagonist, but she doesn’t stint on illustrating how Maribeth was often complicit in her own troubles: in scene after scene, Maribeth allows her husband to be clueless, up to giving him advice about schedules and child care as she’s being taken into surgery. Following her operation, she is right back at it, dragging herself out in the rain to buy lice shampoo and a nit comb when neither husband nor mother will do the job.

Her escape seems logical in the face of how cavalierly her family treats her medical condition. Foreman finds both pathos and humor in Maribeth’s gradual transition to single woman. From letters to her children, written but not sent, to really learning to swim, Maribeth rediscovers the woman behind the mother and wife.

Less successful are side stories about Maribeth looking for her birth mother and an involved backstory about the courtship between Maribeth and her husband. Both feel like filler, inserted to render a mother choosing to leave her family (however briefly) more palatable. In that manner, Foreman betrays her opening posit. In essence, she starts making excuses for Maribeth’s actions.

Maribeth’s French leave begins as a powerful statement that women have a right to stand up for their own needs. By tempering that with, “especially if she’s adopted and needs to find her birth mother for health information” or “well, He ran away first, so that makes it okay for She to do the same,” Foreman waters down what could have been an empowering story; it becomes more of a whine than a roar.

As a first foray into adult novel writing, Gayle Foreman’s Leave Me is successful . . . to a point. It will be interesting to see what she does next.