Learning from the Wounded: The Civil War and the Rise of American Medical Science (Civil War America) Hardcover – March 17, 2014 by Shauna Devine (Author) 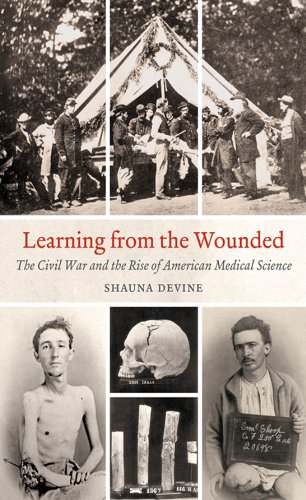 “With extensive notes and bibliography, coupled with many tables and illustrations, Learning from the Wounded is an excellent book for anyone interested in Civil War medicine.”

Two out of every three of the approximately 750,000 fatalities (7.5 million in today’s population) from the American Civil War died from disease. The medical departments of both sides were woefully unprepared for this.

The American medical education system in Antebellum America was largely unregulated; there were no universal state licensing for doctors; and medical school rarely had access to cadavers to teach the students anatomy. Despite all these shortcoming, Shauna Devine believes that the Union’s army doctors were up to the challenges that the war brought forth.

The author begins this volume with a review of medical education in Antebellum America. While anatomy was the cornerstone of medical training in antebellum America, most American Protestants refused to see the dead body in medical terms. Thus medical professionals and students always struggled with the lack of available bodies. While some states passed anatomy laws allowing medical schools to dissect unclaimed bodies, most states opposed these acts, thereby making it harder and harder for medical students to learn anatomy.

When William A. Hammond became Union Surgeon General in April 1862, one of his first acts was the issuance of Circular No. 2 which provided for the establishment of the Army Medical Museum. In the postwar years, this museum became world renowned, with doctors coming from around the United States and the world to view the specimens in the collections.

Several chapters are devoted to the development of new techniques in research and the development of the experimental methods that lead to the treatment and cure of some of the most dreaded diseases of the war, namely erysipelas and hospital gangrene. Other chapters cover the beginnings of medical specialization and research and the controversy of who the bodies of the deceased soldiers belonged to.

The chapter on the postwar period deals with cholera and how the treatment and containment of this disease came about through the lessons learned during the war.

Finally, Dr. Devine discusses the aftermath of the war and what the participants, both North and South, had to say of their experiences and what it meant to American as well as world medicine.

Many of the most influential physicians of the time have their work discussed: Keen, Woodward, Billings, Weir Mitchell, Goldsmith, Gross, to name just a few.

The only drawback this reviewer found was at times it read like a medical textbook requiring the use of not only a period medical dictionary, but a modern medical dictionary to decipher what the author was describing.

With extensive notes and bibliography, coupled with many tables and illustrations, Learning from the Wounded is an excellent book for anyone interested in Civil War medicine.

Peter J. D'Onofrio PhD is President of the Society of Civil War Surgeons, the largest nonprofit, international, educational group dedicated to the study and preservation of Civil War era medicine and surgery. He is also Editor/Publisher of the organization's The Journal of Civil War Medicine. He acts as consultant to many reenactment/living history endeavors and documentaries. Dr. D'Onofrio also appeared on the Arts & Entertainment channel's Civil War Journal episode “Battlefield Medicine.