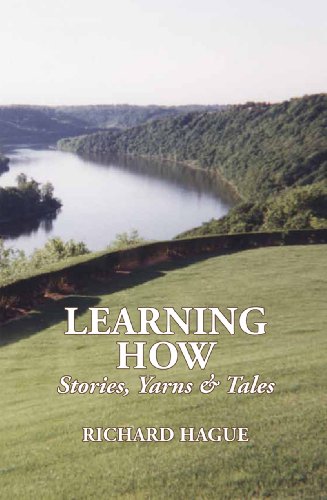 “. . . a story about storytelling can be about both what’s true and what ought to be true. Mr. Hague’s studied delivery, vivid color descriptions, and sense of place imagery make Learning How a storyteller’s delight.”

In the tradition of skilled storytellers, Richard Hague takes his time drawing all the details in these 22 Appalachian stories in Learning How.

In “At Last Out of Bondage,” the author tells of the Army Corps of Engineers work to build a moveable dam on the Ohio River. In 10 pages, Mr. Hague tells a life story. His narratives can suddenly deliver a real punch in a single sentence, as he does here: “And he remembered how, when his groggy brother had slipped and fallen heavily in the boat, it had tipped wildly and his father had gone into the water, and the cries of his mother as she leaned towards the swirling cold, and the fear and the rain and silence that came after that.”

In an early story, “Stop. Look Back,” Mr. Hague describes a Frenchman, a rarity in a small Ohio town: “That’s what brings him to these mountains across the sea. He has heard that it is possible here to begin anew. First, he will lose himself forever, learn new words, eat food that has no name in his former language, inhabit, after some difficult years, something like another body entirely. He will forget everything except what is before him: hickory trees, rampages of clouds, heat of a kind he did not know before, snakes, dark-skinned people, sudden precipices. Distances interminable with no boulevards, no crowds, no flower vendors.”

“Aunt Aggie” is a powerful and tender story and a charming treatment of relationships in the extended family, as two boys enjoy “liberating her for an afternoon from the nursing home and ride her around town in Jack’s ford, listening to her memories and tales.” After a long day driving through town, they head to a bar. “Sit down on either side of me, and keep that bottle moving,” she says. As she sits high and erect on the bar stool, they look out over the river, and sip brandy. After listening to her stories, they return her to the nursing home, where no one notices how woozy she is.

The title story, “Learning How,” is an energetic walk through the story-telling tradition, in which the narrator struggles to find approval as a storyteller, to finally tell a yarn like the best of them. It’s then that he fully learns that a story about storytelling can be about both what’s true and what ought to be true.