Leaning on the Arc: A Personal History of Criminal Defense 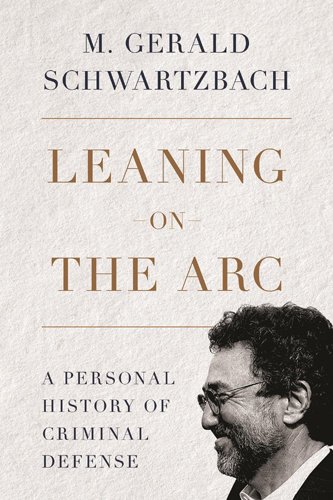 As a defense attorney, M. Gerald Schwartzbach doesn’t always defend “the bad guy” as is popularly portrayed—the rich white man who is trying to get away with murder—but sometimes someone like Delores Churchill, an abused woman who one day tries to free herself by killing her abusive husband. The empathetic reader may struggle to read this significant legal memoir because of the details revealed.

Schwartzbach’s memoir doesn’t glorify his memories or deeds, rather he recalls his cases and the social and political environment of the time, then sprinkles the text with footnotes that follow up on his thoughts on various points, giving reader deeper insight beyond more than just a court case transcript of he-said she-said.

Civil rights play a large role in Schwartzbach’s career. It is interesting to read about his own views and beliefs of the time. For instance, he acknowledges his shortcomings when he takes on Delores Churchill’s case. Women were still part of a deeply entrenched patriarchal system and belonged to men, though technically they could vote and have jobs, etc. Yet for a man to hit his wife wasn’t a large social concern. Schwartzbach admits that even for him it was hardly a concern for him until he was asked to confront it through this legal case by defending this accused woman. The law, as well as society, was against Delores. Yet through perseverance and his determination not to objectify Delores and to learn about the psychology behind abuse, he was able to bring the truth to light in the courtroom where his client was acquitted in a banner case.

Schwartzbach was a trial lawyer for over 45 years in San Francisco, receiving several prestigious awards, and his memoir is a must-read for anyone interested in legal justice. It should serve as an introduction to law students. As hokey as the term “legal justice” sounds, Schwartzbach shows his dedication to human rights in his memoir, regardless of what readers may think of the outcomes of some of the trials and the actions of his clients, such as actor Robert Blake. It is clear that Schwartzbach believes that everyone equally deserves justice under the American legal system.

After such a career as his, surely Schwartzbach could have provided a reading list for interested scholars and lawyers with names of journals, articles, books, and websites that he has used to keep up with current legal trends or that he has even contributed to. The photos included in the book are those of Schwartzbach with various people somehow important to his cases or life, but the photos really aren’t particularly good and don’t add a whole lot of visual depth or information to the overall book.

Readers who enjoy true crime will likely enjoy this memoir.