Lean Your Loneliness Slowly Against Mine: A Novel 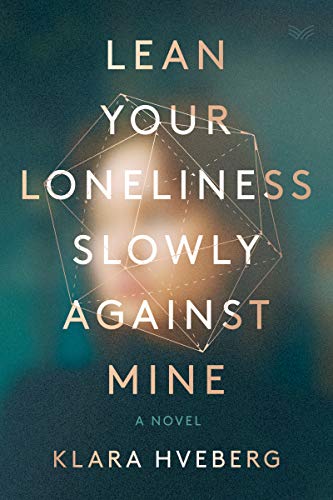 Klara Hveberg has written a stunning debut novel about unrequited love, longing, obsession, betrayal, and more. Complex and alluring, it is framed by the author’s—and the protagonist’s—  expertise in mathematics, as well as by music and literature.

As the title suggests, this is the story of a brilliant young woman, Rakel, who is young, shy, and socially inept. An extraordinary mathematician, she falls in love with her much older professor, Jakob, who returns her love, but who is ultimately unwilling to leave his wife and children.

Their story parallels that of the real-life Russian mathematician, Sofia Kovalefskaya, who also loved her older professor. As Rakel descends into a debilitating illness, she ruminates about Sofia’s life and personality, so much like her own, in an attempt to come to grips with what has transpired. Her quietly desperate search for meaning and for understanding the parameters of love are both naïve and astute.

Aided by ruminations about numbers, music, and literature she comes to accept her fate in ways and words that make us want to embrace her as if she were a child who understands the world far beyond her years.

In the author’s words, Rakel “lies in the bed in her old childhood bedroom, feeling that life is unfair. She overdid it yesterday. She just never learns to adjust. But you have to allow yourself the indulgence of an experience every once in a while. Even if you have to pay for it afterward. Otherwise, life becomes meaningless.”

In her never-ending quest to understand what has transpired, Rakel ponders questions she has about Sophia, but they are really questions she is asking herself. “Did you struggle with the feeling that you were putting on an act? That other people were forming an idealized image of you, one that you felt you had to try and live up to? Did you fear that nobody would like you if they found out who you really were? What you had once been capable of doing?”

These are deep and potentially devasting questions to have answered, and Rakel cannot let them go. Perhaps more than her mysterious illness they are what will cause her demise. And yet she continues to ask them of herself in her loneliness, driven to understand what love is and how it has failed her. The parallels between Rakel and Sophia are helpful yet mystifying, both for Rakel and readers.

As Rakel gradually emerges from her mental anguish through correspondence with another man to whom she is drawn by their common interest in mathematical puzzles, she feels love again. It’s a love much as hers with Jakob was, and offers her the one way that she can come to love herself and find meaning in life. But that love also ends, and ultimately, contemplating Sophia’s death, Rakel thinks, “to stake one’s heart on love is also a form of suicide.”

In the end, Rakel finds lonely respite in writing, taking her cue from a novelist whose words inspire her. “Everything I have written about I’ve had to experience,” he writes, “both in my body and with my soul.” And so Rakel begins writing, compulsively, “as if the words have lain within her, maturing for years.”

When Jakob first tells Rakel years after their liaison began that he cannot bring himself to break up with his wife, Rake asked, “How could you let me wait so long for you if you don’t love me?”  Jakob’s answer: “I just wanted to lean your loneliness slowly against mine.” It breaks Rakel’s heart.

She breaks ours by carrying on alone, exploring life’s meaning in solitude and with a resignation as beautiful as a sonata or a great work of literature.