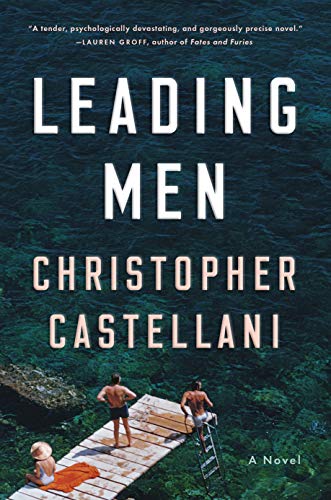 “Castellani delivers a touching, and often eloquent dramatization of one of the most legendary gay couples in theatrical history.”

There is a library full of books about Tennessee Williams, from his published plays, letters and other writings about his triumphant theatrical successes and spectacular flops. Add to that a cauldron of lore about the larger than life gay playwright.

One constant is that Tennessee Williams remains as fascinating and as elusive as ever. Williams’ own Memoirs, full of truths and fantasy in equal measure, was a bestseller, even after a string of theatrical failures. John Lahr’s 2014 exhaustive biography of Williams won the National Book Award and now, award-winning novelist Christopher Castellani weaves fact and potent fiction about Williams’ life and the world in Leading Men.

Castellani Intriguingly makes Williams lover and muse Frank Merlo—or as Williams called him “Little Horse”—the protagonist. Merlo was a Jersey boy who had a minor acting and dancing career after he got out of the Navy. He became Williams’ lover in the late 40s and acted as his private secretary, arranging travel plans and meetings.

So many stories about Williams’ and Frank’s relationship is known, the most famous of which is Frank’s retort to movie giant Jack Warner on the set of The Glass Menagerie being asked why he was there and Merlo replying “I sleep with Tennessee Williams.” And Castellani makes the case that Williams wrote his best plays during their 14 years together.

The novel opens at a party in Truman Capote’s villa in Portofino, Italy. Williams and Frank have been on a relationship rehab vacation nearby, and for the playwright to collaborate with Bowles on the screenplay from Visconti’s operatic drama Senso, which starred American actor Farley Granger.

Williams’ readers will revel in Castellani’s stylish period atmospherics and arch dialogue of the celebrities in Willliams’ orbit—even though Williams careens from believable to vaporous in key moments. Meanwhile, the novel sweeps you up in its wry prose, particularly the fully dimensional portrait of Merlo.

The most gripping scenes depict Merlo battling late stages of lung cancer in a hospital bed waiting to reunite with Williams after their bitter separation. Frank reminisces about their life together, and the book flashes back to their summer in Italy 1953 when Williams and Frank take an aspiring actress Anja under their wing and introduce her to Visconti. Anja is traveling with her toxic mother who is looking for a rich husband and pimping out her daughter.

Anja and Merlo are on the beach and become friends. When they get out of the water, Anja’s bone-white bathing suit becomes sheer; it is a recreation of a scene from Williams’ potboiler homophobic play Suddenly, Last Summer.

A middle chapter titled Men of Feeling has such authenticity in describing Williams’ and Frank’s emotional life together. Particularly about the often toxic cycle of the playwright’s writing habits and the acting out, fights, drug and booze benders, the pick-ups, the corrosive consequences on their relationship, and their passionate reconciliations.

The subtext is the open world of high-profile gay men of the era who had the money and clout to create, but still acting out and unconscious regarding their own internalized homophobia.

Less successful are depictions of Williams in late life and the fate of Anja, now a retired film star, haunted by the past and her relationship with Williams and Frank. She is talked into staging Williams’ final unpublished play, which brings in new characters and some forced plot devises that start to grind.

But past those forced storylines, Castellani delivers a touching, and often eloquent dramatization of one of the most legendary gay couples in theatrical history.