Leading with Cultural Intelligence: The Real Secret to Success 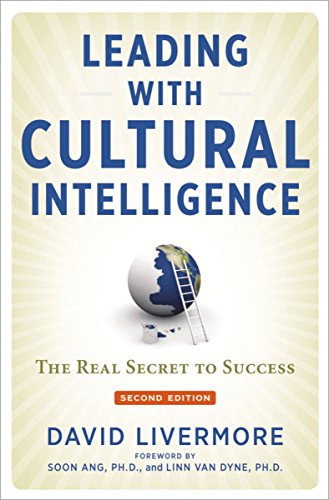 “A key take away from this important book is the imperative to ‘know your place,’ both those places where you live, which are in flux and constantly evolving, and also those places with which you interact, which interactions increasingly involve cultures other than your own native, indigenous culture.”

While it is now possible to order the identical Starbucks coffee concoction in some 25 different countries, presuming there is a universal global communication style, negotiating pattern, or sense of humor, is dangerous, as Dr. Livermore warns in Leading with Cultural Intelligence: The New Secret to Success. Dr. Livermore’s book summarizes research that supports the proposition that cultural intelligence is a distinct competence, alongside such other intelligences as emotional intelligence.

Pointedly, Dr. Livermore advises that what works well in one culture may be counterproductive in another. Thus, a manager unfamiliar with the culture of a place, using criteria that would be applicable in the manager’s familiar place, could favor an individual for a leadership role, who would be entirely unsuitable for leadership in that particular place. To comprehend why there is growing need to be intelligent about culture, it is necessary to consider why people today are more exposed to different cultures and why our places reflect more and more cultural diversity.

Over the broad sweep of history, the culture of most places was common and monolithic. Before placechoice, people of a particular place needed to be concerned only with the culture of that place, which culture they learned through exposure to the people of that place. There was no need to be sensitive to cultural differences, for in most places there were relatively few cultural differences with which to contend.

In the place-choice era, by contrast, the ‘culture’ of places is increasingly not singular and straight forward, but rather plural and multifaceted. Places are now fluid and dynamic. More and more, place experiences and place cultural interactions are likely to involve some aspect of cultural difference, rather than cultural homogeneity.

Until the emergence of place choice, which generally corresponds to the timing of the United States’ Declaration of Independence nearly 250 years ago, most people might encounter only one culture in a single day or even over a lifetime. Whereas social, shopping, and workplace interactions were previously anchored in the familiar—involving people whose ethnicity heritage, values, priorities, and frames of reference were largely common—today the cultural context, subtext, and ethnic composition of places are less common and more differentiated.

The culture of a place informs and influences all place experiences: social interactions, community life, religious expression and festivals, recreation and entertainment, shopping choices and patterns, food and restaurants, schools, health and exercise, even financial affairs. While these aspects of place culture may earlier have been homogeneous, the culture of a growing number of places is increasingly heterogenous.

With more people moving ever more freely and frequently between places, those who do not actually leave their places inevitably experience the cultural composition of their places changing. Some people from other places, with very different cultures, may choose to establish a primary or secondary residence in that place. As a case in point, today the primary purchasers of upper end and especially luxury housing in many major metros are individuals who are not citizens of the country in which that metro is located. Such places also attract large numbers of people from different cultures, sometimes starting at the lower end of the socioeconomic spectrum but then, over time, rising to higher stature through their motivation and hard work.

Consequently, the cultural composition of places is changing. Local businesses—often operated by entrepreneurs who share the culture of recent arrivals—emerge to serve the needs both of those who visit and also of those, from other places, who choose to reside in that place. And people from other cultures may evolve to dominate certain sectors of a place’s economy. In the United States, Indians are a major force in hospitality; Vietnamese, in nail care; and Hispanics, in the building construction trades.

The patterns, trends, and forces described above shall, over time, become only more pronounced, therefore, leading to society increasingly being dominated by multiculturalism—making cultural competence an ever more important attribute for effective participation in society and the global economy. Those who are innocent of these forces and their consequences shall be less and less viable, more and more susceptible to being contemporary society’s culturally isolated, if not obsolete.

Leading with Cultural Intelligence is an instructive, illuminating, accessible primer for all who might have commercial and organizational involvements in the multicultural times of the 21st century. The importance the author assigns to his topic is conveyed by his book’s subtitle: The New Secret to Success.

Dr. Livermore’s presentation style and stories—including some in which the author himself unwittingly and/or insensitively commits cultural transgressions—makes a topic that can be intimidating more easily accessed and understood.

As a practical matter, however, those who are culturally naive literally do not know what they do not know. Many may not even know what is happening. To this point, Dr. Livermore quotes Singapore’s former foreign secretary and United Nations ambassador Kishore Mahbubani: “There are two sets of conversations, one with Americans in the room and one without.”

Dr. Livermore brings passion to his subject, evidencing enthusiasm for and fascination with all things multicultural. He relates that many colleagues, joining him on his assignments throughout the world, and even members of his own family, are not nearly as predisposed as he is to explore a new place, seek out the local indigenous restaurant, and immerse oneself in the local culture. This insight reflects the reality that not all people are similarly comfortable with, facile in, and attracted to different, diverse cultures, which reality is central to his cultural intelligence discipline.

Leading with Cultural Intelligence includes a wealth of stories, insights, and tips. All can benefit from Dr. Livermore’s delineating the ways to develop cultural intelligence. Many will find the author’s guidance on how to eat strange unfamiliar food especially valuable. Those with leadership responsibilities—especially those aspiring to leadership roles—may profit from the concluding chapter addressing how to extend cultural intelligence to the organizational level.

Most instructive is Dr. Livermore’s admonition that if you are going to work in a place, you need to know about the culture and people of that place. This proposition, of course, applies not just for crossing country borders but to different regions of a country and even to crossing state lines, moving within different parts of a state, navigating different communities in a metro, making your way from one neighborhood to the adjacent neighborhood.

Arguably, there are as many differences between New Orleans, San Diego, Phoenix, Burlington (Vermont), and Fargo (North Dakota), as there are between Rome, Chicago, Rio de Janeiro, Dubai, and Tokyo.

A key take away from this important book is the imperative to “know your place,” both those places where you live, which are in flux and constantly evolving, and also those places with which you interact, which interactions increasingly involve cultures other than your own native, indigenous culture.