Leadership in War: Essential Lessons from Those Who Made History 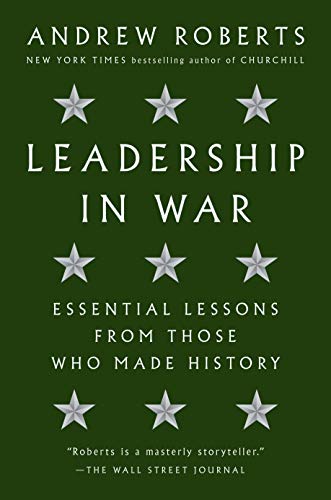 “As an anthology, Leadership in War offers a fine, if not overly in-depth sampling of wartime leadership to show that successful wartime leadership is a rare commodity. All of these chosen individuals, good and malevolent, show that determination, vision, and a single-mindedness bordering on ruthlessness is needed in trying times.”

Andrew Roberts, bestselling historian and biographer, examines these questions in this short but fascinating anthology based on a series of university lectures, using a cross-section of wartime leaders from Napoleon to Margaret Thatcher.

In an anthology like this, the chosen subjects are significant as they drive the analysis, and Roberts has picked well-known leaders from history to offer particular examples of leadership, both tactical and strategic.

Overall,  leadership ability is morally neutral. Two of his chosen leaders, Hitler and Stalin, were notorious dictators. Yet even though they were both supreme warlords, they significantly diverged on their leadership styles. As the war progressed, Hitler became more of a micro-manager, overruling his generals and committing major strategic blunders. Stalin, while micro-managing his generals as well during the early months of the German invasion of Russia, eventually trusted a small group of commanders with the ability to plan and conduct campaigns—as long as they were successful.

Second, successful wartime leaders always inspire confidence in their subordinates, although they can achieve this in different ways. Napoleon, whom Roberts admires greatly, was able to motivate his troops merely by his personal presence on the battlefield. Not only did Napoleon have a personal magnetism to inspire his troops, he had the rare gift for a battlefield commander, the ability to envision the flow of a battle through time and terrain, giving him the ability to plan the battle while anticipating his opponent’s potential responses.

Dwight Eisenhower did not have Napoleon’s personal magnetism, but he had another rare talent in a high-ranking commander—the ability to keep together a fractious group of multi-national subordinates to achieve victory. Although he never commanded troops in combat on a tactical level, he was unquestionably the right strategic commander for his mission.

His great skill was forging an Anglo-American alliance, keeping together a coalition of egotistical and often short-sighted commanders using his personal charm and diplomacy. His unmatched capability to manage the resources and personnel produced by the Allies in an age of industrial and mechanized warfare made possible the armies that would invade Europe and drive into Germany.

Of course, an often overlooked feature in assessing successful wartime leadership, particularly at the strategic level, is ending the war with a favorable conclusion. While Napoleon was the premier battlefield commander of his age, he could never truly make peace. His perpetual conflict with most of Europe would inevitably lead to his opponents beginning to adapt and copy his battlefield tactics while his constant warfare eventually aligned nearly all the major powers against him.

By this standard, one could make the case that Stalin was the most successful of the leaders examined by Mr. Roberts. In addition to making a significant contribution to the defeat of Nazi Germany, Stalin was able to impose a Soviet-centric order on the nations occupied by the Red Army in 1945, creating a vassal empire that offered a buffer for Russia which lasted almost half a century.

Finally, as the last essay shows, wartime leadership is not exclusively a male domain. British Prime Minister Margaret Thatcher had to make a number of tough decisions in 1982 when she sent a British task force to expel Argentinian invaders from the Falklands Islands. Her determination to conduct a risky military operation that many in her own government expected to fail was a turning point in recent British history and the trust she showed to her military commanders was validated with the complete victory of British forces.

As an anthology, Leadership in War offers a fine, if not overly in-depth sampling of wartime leadership to show that successful wartime leadership is a rare commodity. All of these chosen individuals, good and malevolent, show that determination, vision, and a single-mindedness bordering on ruthlessness is needed in trying times. Of course, both Napoleon and Hitler show that ends and means must also be carefully weighed and measured in order to secure a successful conclusion to wars. As a quick introduction to this topic, it is thought-provoking without being overwhelming.