Leadership Rules: How to Become the Leader You Want to Be 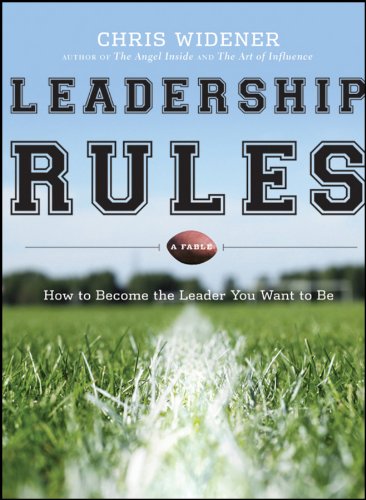 There’s not much to this book. It’s primarily sizzle. And instead of steak, we get a hamburger—which is not a criticism. I personally like hamburger, and I like the material in this book. My criticism is that in its 176 pages, Leadership Rules doesn’t contain anywhere near enough content. In fact, you could probably ditch the entire first part—the parable, occupying 127 pages—and go right to The Lessons.

These are valuable because they are simple, straightforward, and they might even work . . . if the world would stand still long enough for you to put them into action.

An apt analogy for the deficiency in this book might be to the lessons my teachers offered me in engineering school—before I dropped out. “A man shoots a cannonball with velocity X and angle Y,” they would say. “Where does it come down?” Now here’s the important part of the lesson I learned in engineering school: “For purposes of this problem,” they would suggest, helpfully, “you may ignore the effects of air resistance.”

That, in a nutshell, is why I dropped out. Because while you certainly can ignore the effects of air resistance, the minute you do so you lose touch with reality, and your answer is going to be only theoretically valid in an ideal world. Even back in my college days, I knew that we don’t live in a vacuum chamber, and our cannonballs don’t fly entirely within such benign environments. In point of fact, our cannonballs fly in fairly combative environments in which they encounter not just air resistance, but shifting and swirling winds, perhaps even anti-cannonball defenses. As a result, there’s no telling where a real live cannonball will come down without actually launching one, and even then you can’t be sure the next cannonball will duplicate the trajectory of the first.

There’s the same problem, only even more complex, with leadership. Any erstwhile leader who simply follows the advice in this book will fire off cannonballs of leadership with velocity X and angle Y. But providing any help for such a leader in calculating where they will come down—that is, how they will actually impact the people this leader is trying to influence, and what results those cannonballs of leadership will actually produce when they hit—is way beyond the scope of this book.

This book’s much-touted parable of leadership takes place in a small town in Texas, where a big-city executive finds himself “sent down” by his corporate masters to learn some practical leadership after failing to live up to his apparent potential, and not incidentally getting kicked out by the wife he loves for failing to be a good enough leader/husband. Overly confident at first, our hero soon recognizes that this small-town’s high school football coach is a master of leadership, and that the coach’s four rules of leadership can be applied across the board in business, family, and social settings.

He does so. They work great. Pretty soon everything in our hero’s work, family, and social situations are back to being as hunky-dory as he always dreamed they could be. Fade out.

Anyone who has actually tried to lead people, though, will recognize a few variances between this book and actual reality. People aren’t blank slates. They don’t forget past slights, disses, or contradictory reward structures. Corporate cultures aren’t turned around in months, nor does everyone climb on board and pull in the same direction when a leader sets out to establish a new regime.

The rules in Leadership Rules—which basically state that people will deliver what their leader expects, models, rewards, and works toward—are good as far as they go. But in the real world of business, organizations, and human activity, they don’t go any further toward teaching the reader how to be a real leader than my engineering teachers took me toward being able to calculate real results.

It’s all well and good to understand the basic math. Yes, leaders should absolutely understand that positive, cohesive, and consistent standards for expectations, leadership activities, performance rewards, and effort yield far better results than the old fashioned way, which has been aptly summed up as: “The beatings will continue until morale improves.”

But knowing these rules does not make for leadership. Actual leadership in the real world involves much more, such as: being able to read which of your followers are with you and which against you, what motivational systems people are perceiving and responding to, and how those systems differ from the theoretically perfect one posted as the organization’s Mission Statement and Values. Real leadership involves getting people to buy into your goals, your methods, and your approaches, to feel good about their teammates, and in most cases to subordinate or at least align their personal desires and goals to those that most benefit the organization.

Because the small-town high school football coach in this book’s parable wins 18 State Championships, all the necessary elements of effective leadership are somewhere in this book. They’re just not explicitly listed or explained.

Like The Little Engine That Could, Leadership Rules gives us a great story that everyone will feel good about experiencing. But it contains very little guidance on how to achieve that exhilarating level of results once we close the book and return to our actual, everyday lives.