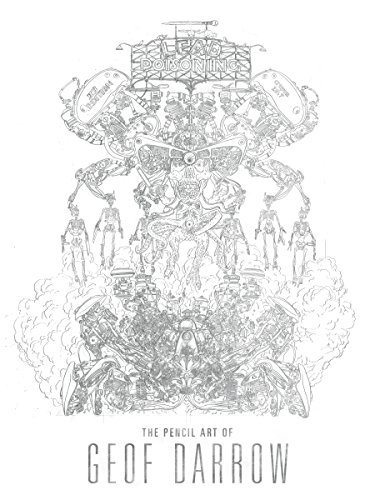 “Lead Poisoning is a fantastic voyage into the head of an artistic visionary.”

Monsters, cars, guns, and pugs. Geof Darrow’s obsessions boiled down to four words. Stripped of the usual colors and inks, Dark Horse Books has released Lead Poisoning: The Pencil Art of Geof Darrow. The assessment of Darrow’s work is a case in which language can be insufficient. Description alone can’t do his work justice, a farcical melange of Where’s Waldo, Hieronymus Bosch, Sam Peckinpah, Blade Runner, and Rat Fink. Ultraviolence meets body horror, albeit a meeting more fun than dour. Despite the gory bullet-laced proceedings, Darrow wants everyone to have a good time. Imagine Sam Raimi’s Army of Darkness on an unlimited budget and unshackled from the contradictory moral standards of the MPAA.

Darrow burst on to the comic book scene with Frank Miller’s Hard Boiled. Miller brought the requisite dark and gritty storyline to the comic’s 1990 to 1992 run. Darrow’s contribution threw the entire narrative into a visually excessive overdrive.

As Steve Skroce remembers, “The first time I saw Hard Boiled it sickened me. I had never seen anything with such bizarre and extreme sex and violence. It was the Where’s Waldo? of brutality. My young mind had no category for it. I thought it must be ‘European.’” Skroce is one of many contributors in Lead Poisoning showering Darrow with positive accolades. The “European” feel to Darrow’s work is an appropriate descriptor, since other contributors liken his art to that of Mœbius (Jean Giraud). Other contributors include Mike Mignola, Joss Whedon, Chuck Palahniuk, and Sergio Aragonés.

Dave Stewart writes in the Introduction, “Geof’s ideas bleed into the surroundings of the subject: human impact on nature, our violent tendencies, greed and the marketing machine that feeds it. Racism, politics, religion, health, war, sex, humor, excess. Geof’s work is not always cynical, though. He often meets his subjects with a fantastic humor that takes out some of the bite. He frames our world in a way that shows how ridiculous we are when are our worst.”

His caricatures of Trump are merciless and hilarious. The Twitter-feuding dingbat is rendered as a flying baby spewing skulls on passersby in a billboard-infested urban area. (Pedestrians remain somehow oblivious to the giant baby with a massive car motor strapped to its back.) Editorial cartoonists have splashed a lot of ink around depicting the neophyte politician and his runaway mouth. Darrow’s depiction someone rises above the usual dross on opinion back pages by creating an image both accurately offensive and utterly new.

But the book isn’t just easy targets. Lead Poisoning brings together pencil drafts from published works, unpublished sketches, and random unclassified work. Pencils from Hard Boiled, The Big Guy and Rusty the Boy Robot, and Shaolin Cowboy. Shaolin Cowboy remains his most personal work. Mike Mignola, famous for creating Hellboy, praised Darrow’s character, “And the Shaolin Cowboy is pure Geof Darrow. He is Geof’s unknowable man—on the surface a patchwork of things Geof just likes to draw, but inside . . . the inner workings are a mystery. We don’t know who he is, where he comes from, or where he is going, and I for one like it that way. For me he is the purest Geof Darrow toy (with no end to cool accessories), and the world he stumbles, punches, kicks, and saws his way through is, really, just the inside of Geof’s head.”

Several contributors throw around the word genius a lot. In other circumstances this might comes across as overpraise or downright fawning. But Geof Darrow is a pure genius. He has his own unique visual grammar coupled with a childlike joy in his creations. He draws with a hyper-detailed precision. The engines look plausible as do the arms and heads sprouting from whatever monster is on the page. In some instances the monster has hot rod engines attached to its body, virtually bursting out of its skin. As Yoshihiro Watanabe says, “The art that comes out of this miracle, Geof Darrow, is insane, outrageous, full of obnoxious ideas, and drawn with delicate precision.” Lead Poisoning is a fantastic voyage into the head of an artistic visionary.