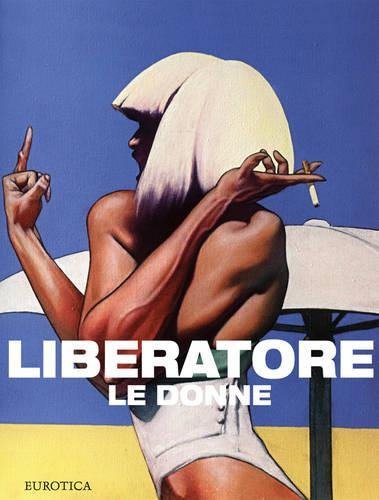 Heavy Metal magazine covered a tremendously wide range of artistic and narrative styles during its heyday. Mixing science fiction and fantasy, and often doing it while incorporating a mixture of overt and direct sexual imagery, the magazine celebrated the artist as much as the story.

Artists such as the late Jean Giraud (Moebius), Milo Manara, Gray Morrow, and H. R. Giger could all be found between the pages of the magazine. Stories were often serialized, allowing writers room to develop their themes along a more novelistic approach.

Heavy Metal was originally a French publication. When it was adapted to the American market it utilized the original art and writing of the European artists and adapted them to the American market, changing very little except language in the process. This gave the title an individuality and presence on the newsstand that was unmatched during the late seventies and eighties. Its influence on the next generation of artists and writers is incalculable.

One of the most striking story lines to ever appear in the pages of Heavy Metal was Stefano Tamburini and Tanino Liberatore’s RanXerox series. While the series was first published in a smaller press in 1978, it really hit the fan base when Heavy Metal ran the ultra-violent story in 1983.

Centered on a Frankenstien-esque monster constructed from various parts of abandoned Xerox machines, the story attracted attention round the world for not only its violence, but its reflection of individual desires and wants. Heavy Metal ran several storylines and eventually even books appeared centered on the “hero” and his friend, the underaged “Lubna.”

Since the series established artist Mr. Liberatore as a force in the world of fantasy and adult art, he has gone on to a wide-ranging career in film, comics, album cover design (stateside he is most famous for Frank Zappa’s The Man from Utopia) and art books. His latest compilation, Le Donne, mixes the sensuality of women with a toughness and strength that some may find disturbing.

While the book is filled with his art and contains no narration or anything to place the work in a broader context, this isn’t just pin up art. Without narration, the diffuse themes that run through the book create a mélange of differing outlooks from threatening to soft and submissive. Sections of the work are broken down by themes such as Desire, Flesh, Intimacies, Chiaroscuro, and others.

In some ways several of the pieces are a reflection the place of sensuality in art history. The cover is graced by a blond-haired woman smoking a cigarette in one hand while flipping the bird with her other. The stiff-backed presence of the figure, the cut of her hair, the strength found in her arms and shoulders, harkens back to images found in Egyptian tombs and art. In essence, the book opens with the history of art in one arresting vision: the coupling the accepted image of ancient Egyptian art with the “in your face” attitude of punk and modern society.

In another image, Mr. Liberatore incorporates a sly nod at the “all-knowing smile” of the “Mona Lisa.” Only this time the world’s most famous face is now a simple, hairless mask that hangs in space, it’s shadow falling to the side as if it were hanging on the wall of a private house, her left eye obscured by a black frame resting unbalanced over her face.

Other images incorporate women with weapons. Guns, hatchets, and axes become props that simultaneous threaten and yet hold the promise of liberation from all control. Humor never drifts far from Liberatore’s pen as one woman sits with a golf bag between her legs. The bag not only holds a few familiar irons, but several axes as well. As she pulls a large axe from the bag she holds a golf ball in her other. This isn’t the only time Mr. Liberatore hints at castration as either fun or defense.

In a section titled Pulse a man stands in a shower holding his penis in one hand, stretching it as far as he can. In his other he holds a knife. His head is partly bowed and his eyes hold the determination of a soldier ready to take an order that would cause others to run and panic. To the right of the viewer stands a woman, nearly fully clothed with only a small amount of fabric has dropped from her shoulder, apparently ready to give the order if she should so choose.

In several works religion and specifically Catholicism are referenced directly. Again mixing history and sensuality, Mr. Liberatore’s own heritage as an Italian artist is addressed as the acts depicted bring to mind Boccaccio’s Decameron. The idea at the center of both works being that sex itself is natural and not something to be held up as a sign of moral decadence nor are the sensual delights of a person something for us to judge.

The book contains graphic depictions of numerous sexual acts and very personal moments. While the nudity of women is often front and center, men and their genitals get a fair mount of stage time as well. Women are portrayed as sweaty, muscular, and fully involved as willing participants.

Even with all the nudity there is one aspect of Mr. Liberatore’s work that always strikes home. He can fill the page with just a smile or a look in the eyes of the model. The beauty found in those eyes and the smiles he depicts can often make the overt sexual nature of the image practically disappear.

In his best work, it is the way the model can draw you in with just a slight, flattering look in your direction. Sometimes it is a flat-out declaration of “I don’t care what you think. I like this” pulling you in. This is the most thrilling part of the works featured, the personalization, the intimate look into the sheer joy in Tanino Liberatore’s art.