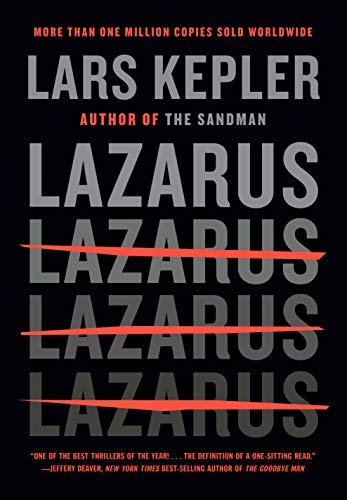 “Lazarus is a thriller par excellence, though it’s advisable to read it in small increments, for the accumulation of too much horror at one time will definitely lead to sleepless nights, continuous checking of locks, and an increase in one’s lighting bill.”

“A policeman’s lot is not a happy one.” So sings the Sergeant in the Pirates of Penzance, and for the members of the Scandinavian National Crime Unit, that is an understatement.

Years ago, Detective Joona Linna’s squad pursued a psychopath named Jurek Walter, a man on a particularly violent killing spree, who also threatened the team and their families. Jurek was killed by Saga Bauer, and the threat was over. Now, Joona’s weekend with his girlfriend is interrupted with startling news.

“‘The Oslo Police found a dead man in an apartment. All the evidence suggested a run-of-the-mill drunken fight, but when they looked in the victim’s freezer, they found body parts  belonging to a large number of different people.’

‘What does this have to do with me?’

‘He had your wife’s skull in his freezer.’”

There is no indication the dead man had any relationship to Jurek Walter, but Jurek had threatened to kill everyone on Joona’s team.

“Before he was taken out of court, Jurek turned toward Joona. His face was covered with tiny wrinkles, and his pale eyes looked strangely empty.

‘I’m going to grind you into dust,’ Jurek said quietly.’”

Because of that threat, there are headstones in the family plot in Stockholm engraved with the names of Joona’s wife and daughter, while Summa and Lumi lived far away under new names until Summa died of cancer.

Soon after, some of the team’s families disappear and are never found, and in despair and grief, those members killed themselves.

When reports of other, similar crimes being committed with two of the victims having indirect connections to Joona, he comes to the conclusion that Jurek Walter survived Saga Bauer’s’ bullets, though the body’s identity was confirmed by DNA.

Joona’s assertions are brushed aside by his chief. As a result, Joona leaves the force, takes his daughter, and goes into hiding.

Soon, not only will the surviving members of Joona’s team realize their mistake in believing Jurek Walter dead, but each will be faced with his worst nightmare involving their own loved ones as the merciless psychopath wreaks a swath of vengeance reaching across the entire continent of Europe.

The warning is plain in the opening sentence of the Prologue: “The light of the white sky reveals the world in all its cruelty, the way it must have appeared to Lazarus outside the tomb.” Any novel beginning that way is definitely not going to contain very much sweetness and light.

There’s very little light in Lazarus, at all. If fact, it’s as dark as the tombs in which Jurek Walter buries his victims.

The characters are introduced quickly, with little fanfare, and, though we don’t learn much about their lives before this particular story, as is usual in most crime stories, the hints are there, making the reader want to know more.  Why were Saga Bauer and her father estranged? Where is her half-sister’s mother? It’s mentioned that Joona was in prison, his sentence reduced to community service, after which he will return to active duty. Why was he jailed? How can he be a police officer again after being a convict?

Undoubtedly, the explanations are given in other books in this series, for they are never answered in this one, the focus of the entire novel being the pursuit and capture of Jurek Walter.

In the long view, background doesn’t matter. The case at hand is a particularly gruesome one, because of the previous relationship between killer and pursuers, and the promise Jurek has made. It’s almost like one of those slasher movies: The killer seems to be stopped, the danger averted, but again and again, the police are outsmarted. No matter how much they discover or what precautions are taken, Jurek is always two steps ahead. He knows this team well and is using that knowledge against them—and so far, he’s the one winning.

This husband and wife team writing as Lars Kepler certainly knows how to pile on the horrors and give the reader a surfeit of chills, so much so, that at some time, it seems there should be a cry of “Enough!”

Underscoring the lyrics of the Gilbert and Sullivan song, a policeman’s lot is truly an unhappy one, especially for Joona and his people, and this novel proves it. Evil may be subdued and at last destroyed, but for the survivors, the aftermath is as disturbing as the crimes themselves.

Lazarus is a thriller par excellence, though it’s advisable to read it in small increments, for the accumulation of too much horror at one time will definitely lead to sleepless nights, continuous checking of locks, and an increase in one’s lighting bill.