Lawrence in Arabia: War, Deceit, Imperial Folly and the Making of the Modern Middle East 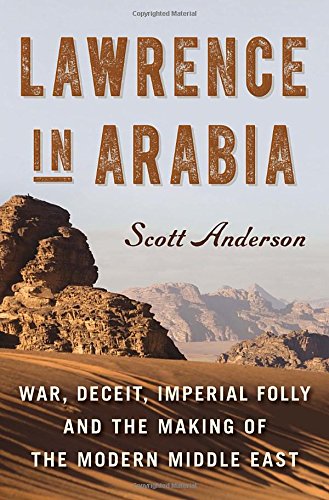 Lawrence in Arabia: War, Deceit, Imperial Folly, and the Making of the Modern Middle East sets the framework for a revisiting of the T. E. Lawrence saga by casting a much bigger net than Lawrence did in his work The Seven Pillars of Wisdom and in the film Lawrence of Arabia.

The historian’s art is at full play here with Scott Anderson weaving a complex web of both competing personalities and competing interests with special reference to Lawrence himself, where Lawrence is portrayed as a passionate dissembler for the cause of Arab Nationalism circa World War I, the Arab revolt participants as represented by the Hussein family of Mecca, the British and French foreign offices, officials in the Turkish and German war efforts, the emergence of the Zionist struggle culminating in the Sykes-Picot Treaty and the Balfour Declaration, and the power of America both corporate (Standard Oil of New York) and political in the region of the Middle East.

The appeal of this book is how well it is written. The following excerpt expresses Mr. Anderson’s glib and substantive turn of phrase written in a clear style while representing the protagonist’s (William Yale’s) loss of his family’ s economic well being prior to his graduation from Yale:

“William’s (Yale’s) reaction to this news was mixed: but a shock leavened by a sense of liberation. Here was the chance to pursue the adventurous life he dreamed of. That summer, he took a leave from the university and shipped out to Panama.”

As author Anderson notes in his introduction: “History is always a collaborative effort, and in the case if World War I an effort that involved literally millions of players, but to a remarkable degree, the subterranean and complex game of these four men played, their hidden loyalties and personal duels, helped create the modern Middle East, and, by inevitable extension the world we live in today.”

In light of this particular historical drama, who were these three men there in addition to Lawrence? The dramatis personae include: William Yale, originally a Middle East regional employee with what was then Standard Oil of New York, who later became the US Department of State representative in the Middle East, making his mark obtaining oil concessions for what was to become Israel and Palestine.

Dr. Curt Prufer, who served as Oriental Secretary to the German Embassy in Cairo, and was later to spear head the spying effort for Germany in World War I while fomenting the potential fires of Jihad with certain Arab interests; and the agronomist

Aaron Aaronsohn, who was born in what was to become Israel, and who in Anderson’s words was so influential because: “. . . his Zionist arguments were not based on political or religious abstractions, but on the purely practical, almost the mundane: agriculture.” Aaronsohn ran the indigenous Jewish spy network in what was then Palestine while working in collaboration with the British.

Anderson describes T. E. Lawrence as a dissembler in the following excerpt:

”As Lawrence admitted, he frequently shaved the facts in what he passed on to Cairo about the Arab Revolt and its leaders, but suggested it was really to everyone’s benefit: “Since (British) Egypt kept us alive by stinting herself, we must reduce impolitic truth to keep her confident and ourselves a legend. The crowd wanted book-heroes”: And like any good performer, Lawrence gave the crowd what they wanted.” Brings to mind Edward Snowden!

Able to use communications: “Lawrence would prove very adept at using both the advances and deficiencies in communications to his advantage, repeatedly breaching protocol to get messages to his allies quickly, conveniently failing to receive undesired orders-“garbled transmission” was a favorite excuse-until it was too late and the matter decided.”

As noted earlier, Mr. Anderson has a facility for describing the beauty and complexity of historical events played out in his narrative. A few of them are described below:

1) Conflict within British policy: “In their battle for primacy over Arabian policy, two different branches of the British crown were backing two sworn rivals. Surely that was less a recipe for successful Arab revolt than civil war.” This description resonates with what is going on with the competing interests in Syria, Lebanon, and Egypt today.

2) The relationship between the “nativist” Zionists (Aaronsohn), and the political Zionists in Europe (Chaim Weizman). As the author notes:“ To gain a “national home” in Palestine, the Jews obviously needed the British to win the war, which also meant they needed to support the Arab Revolt.”

4) His discussion of the interplay between the British and French with the French wanting to control Syria after the World War I.

5) Battle between Allies and the Germans and Turks and the intra-Turkish rivalries.

As Mr. Anderson notes in response to Lawrence’s sometimes ruthless actions on the battlefield: ”As a boy he had been obsessed with the tales of King Arthur’s court and the chivalric code, had dreamed of living a heroic life. In the reality of war, however, Lawrence had seen men blown to bits, often by his own handiwork, had left wounded behind to die, had ordered prisoners to be killed. Just as any thoughtful person before or after him, what Lawrence had discovered on the battlefield was that while moments of heroism might certainly occur, the cumulative experience of war, its day-in, day-out brutalization, was utterly antithetical to the notion of leading a heroic life.”

The heroic life is what is portrayed here by Scott Anderson in his narrative of the Middle East circa the World War I era. It is a must read for historians and those with an interest in a good story within a well developed narrative.