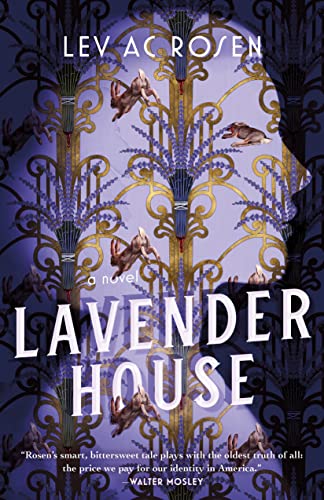 “Rosen is excellent at creating the perfect murder mystery setting and in peopling it with interesting characters and complex relationships.”

It is 1952 in San Francisco, long before The Summer of Love, Harvey Milk, and Gay Pride Parades. The San Francisco Police are brutally homophobic. Evander (Andy) Mills foolishly believes that he can combine being a good cop and a gay man. When Lavender House begins, Andy has been caught in the raid of a gay bar and fired from his job.

As he sits in a bar drunkenly contemplating suicide, he is approached by Pearl, a well-dressed woman sporting a cigarette holder. Pearl, Andy observes, is “right out of a movie.” She certainly is a familiar figure in classic detective fiction, except for the fact that she wants Andy to investigate the death of her female lover. Was Pearl’s beloved Irene’s death an accident or murder?

Pearl drives Andy to Lavender House, the secluded, elegant, gated mansion occupied by her gay intentional family and supported by their business of producing fancy scented soaps. Irene, the victim, was the mastermind behind Lamontaine Soaps. She and Pearl lived in Lavender House with their son, Henry; his wife, Margo (married for appearances); Henry’s lover, Cliff; and Margo’s lover, Elsie, who runs a San Francisco gay bar. Margo’s disapproving mother manages the domestic staff who, of course, are gay and happy to serve this isolated community. The occupants see Lavender House as a safe enclave in a homophobic world. It is both a space where they can express their love freely and something of a prison. No one from the outside can get through the gates and the people inside have to keep their abode a secret. Needless to say, the occupants aren’t too happy about an ex-policeman living in their midst and learning their secrets.

Lavender House has many of the classic elements of detective fiction: a secluded mansion occupied by rich eccentrics, all of whom have guilty secrets, and most of whom have a motive to kill the victim. There are also a few good-looking men eager to get Andy into their beds. What enlivens Rosen’s novel is his sense of what it must have been like to experience internalized and brutally enforced homophobia. Andy Mills feels guilt and shame as much as he feels anger. One element of Lavender House is his growing determination to live as proudly and happily as he can.

Rosen is excellent at creating the perfect murder mystery setting and in peopling it with interesting characters and complex relationships. The last chapter of Lavender House paves the way for future novels featuring Andy Mills in his new role as private detective with a gay clientele. Readers look forward to the next book in the series.