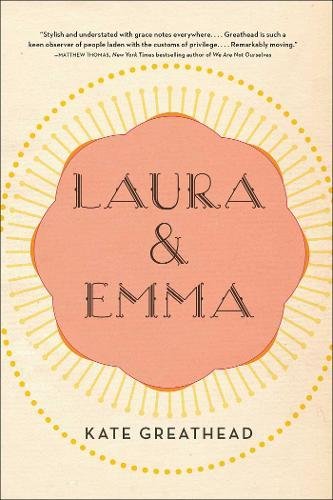 In a world in which books, TV, and the media often seem to be screaming, it’s refreshing to come across a novel that remembers the value of the whisper, of subtlety, and of not having to have everything spelled out. Laura & Emma is one such novel.

A story of a young woman growing up in 1980s New York who finds herself unexpectedly pregnant in an extraordinary way, Laura & Emma is not only a story of a mother and her baby daughter but also an exploration of class and privilege during the time period in which it’s set. Quite a few benefits—such as the part-time job at the library her grandfather endowed that allows for full-time pay and summers off and a significant level of financial support from her parents—are bestowed upon Laura, yet her life is as simple and unassuming as it could be.

Laura has little concern for her social life or the trappings of her privilege and, instead, spends quite a bit of time thinking about the environment and the role she plays in its conservation. As such, she keeps her level of consumption very low. Her simple uniform of Laura Ashley skirts and turtlenecks is something she draws a bit of flak for in the novel, but ultimately her style choices are less about how she looks and more about her fear of overflowing landfills and global warming. The beginning of the AIDS crisis also comes into play in a very interesting way throughout the course of this book.

The level of tolerance of Laura’s parents over her pregnancy, which she tells them was via a sperm donor, was a bit surprising, as a woman of her class having a baby out of wedlock would certainly have been a scandal—especially more than three decades ago. But perhaps a scene would have been too inappropriate and loud.

Laura’s mother Bibs, who is one of the more entertaining and lively characters of this novel, is a bit of a wild card and can be somewhat unpredictable. At the beginning of the novel, her level of acceptance of Laura’s pregnancy seemed odd, but by the end it is clear that she is a fun-loving woman with a bit of a devil-may-care attitude who worries very little about what other people thought, despite her status in the social echelon.

Laura, in contrast, is the pinnacle of self-control, either from her upper crust upbringing or because it is her innate personality or perhaps a combination of the two, but her careful restraint in almost every situation is one of the most interesting things about her character, especially since her mother is larger than life, extremely impulsive, and lacking a filter. Laura is quirky enough to be interesting but not so quirky that it seems overdone.

Laura’s daughter Emma comes into the world a feisty, plump little girl in contrast to her mother Laura’s petite, waifish figure. Emma doesn’t seem to contain any of her mother’s self-control and is quite a bit more like her grandmother, with whom she immediately connects and seems to have a lifelong bond with from the start.

Laura and Emma have a relationship based on mutual respect and Laura’s understanding that Emma is capable of understanding the truth, but as the story about her father unravels and her teen years are upon them, the relationship between the mother and daughter changes in some trying but very realistic ways.

Readers who enjoy character driven novels will be instantly drawn to Laura & Emma as long as they are not expecting a tied-up-with-a-bow ending. But, as the best people—and stories—in life often do, Laura and Emma leave us contemplating the meaning of it all and wishing that we had more time to spend with these heroines.