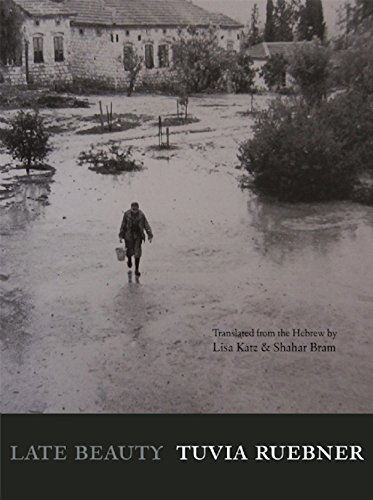 Although Tuvia Ruebner—the 2007 winner of Israel’s Prime Minister’s Prize, 2008 winner of the Israel Prize, as well as Germany’s Konrad Adenauer Prize—is the author of 14 books of poetry in Hebrew (11 if we subtract two volumes of collected poems and an illustrated book of rhymes for children) and nine he translated into his native German spanning six decades, only a handful of his poems were available in English in anthologies and literary magazines prior to the 2014 joint publication by Hebrew Union College Press and University of Pittssburgh Press of In the Illuminated Dark, a bilingual edition of his selected poems translated by Rachel Tzvia Back (also reviewed in NYJB).

The NYJB review of In The Illuminated Dark relates that “Unlike other Israeli poets of his generation Ruebner came to Hebrew poetry via German rather than British and American poetry, and the second strike against him was that his mentor and champion was Leah Goldberg (who came to Hebrew poetry via Russian poetry) rather than the well connected and influential Natan Alterman whose proteges included Yehuda Amichai, Natan Zach, the American-Israeli poet T. Carmi, and Ruebner’s friend and fellow Holocaust survivor Dan Pagis.”

Though for most of his career Reubner was less famous than his above mentioned contemporaries his books continued to be published and his poems anthologized; after outliving his colleagues recognition and appreciation came late but at least in his lifetime (he’s now 94). In their introduction to Late Beauty its translators place Reubner in “a broader, International group of multilingual writers.”

The predominant theme in Ruebner’s poetry is loss: loss of parents, grandparents and a sister in the Shoah, of his first wife to a traffic accident, and of his youngest son Moran who cut off contact with his parents during a trip overseas.

While Ruebner was working with Ms. Back on that larger edition of his selected poems he was also guiding another team of translators who were working on this book under review. At just under 400 pages Ms. Back’s translation represents Ruebner’s entire six decade oeuvre. This selection translated by American-Israeli English language poet and Hebrew to English translator Lisa Katz and Israeli Hebrew language poet Shahar Bram, who usually translates from English to Hebrew, has a narrower focus on Ruebner’s postcard, ekphrastic, and autobiographical poems (though those categories overlap) spanning 45 years and culled from seven books of poems.

Their collaboration began in 2009 when Bram asked Katz to translate the Ruebner poems Bram quoted in a scholarly book on the poet that was being translated into English.

A year after In the Illuminated Dark was published in the U.S. Late Beauty was first published in England. After its 2017 American publication it was named a finalist for the National Jewish Book Award in poetry.

Both translations add and subtract, but overall Katz and Bram tend to subtract more often than does Back. Their more streamlined versions have greater velocity, while the line breaks in Back’s versions are usually closer to those in Reubner’s original Hebrew than are Katz and Bram’s. This doesn’t mean that one translation is better than the other, just that they are different.

One poem in which Katz and Bram’s subtraction improves the poem or at least performs public relations for the poet is “Uruguay-Ghana 2010”:

“There’s no need to write a poem about soccer

even during the World Cup.

Most of the spectators manage

But I’d tell the player from Ghana

that I really wanted his team to win, and that the referee

should have awarded him a goal when his fabulous kick

was blocked not by the goal keeper but inside

at the hands of an ordinary Uruguayan player . . .”

In Ruebner’s Hebrew on the facing page in line five the noun translated as player is modified by the adjective “shachor” (black), which Katz and Bram have omitted. By congratulating himself on his lack of racial prejudice the poet belies his intention, an unforced error his translators correct. Apart from that it’s a terrific sports poem reminiscent of the sports themed poems of the late American poet William Matthews.

Even more noteworthy, in the next two lines Ruebner changes a Hebrew word in the two editions. Addressing those two lines in their endnote on the poem Katz and Bram relate,

“In the original Hebrew poem, ‘A victim doesn’t have to be ashamed because he was/ a victim.’ In the English translation, however, the poet asked us to replace the word ‘victim’ with the word ‘hangman.’ Reubner says that this ironic reference to the Austrian collaborators with the Nazis, who after the war called themselves ‘victims,’ would be lost on contemporary readers.”

In the Back edition Reubner replaces the word “korban” (victim/sacrifice) that appears in the Hebrew of the Kazt and Bram edition with “m’ratze’ach” (murderer, which is how Back renders it). This suggests that Ruebner changed the version of the poem he gave Back to translate following an earlier correspondence with Katz and Bram, despite the Back edition’s earlier publication date.

“It isn’t necessary to clean sidewalks with toothbrushes./Yet Vienna is beautiful, a spotlessly clean city/with a rich past.” (Katz and Bram) In her endnote to this poem Back cites Reubner’s memoir “that Vienna . . . was the first city where Jews were forced to scrub the pavements with toothbrushes. It was there, he writes, where Jews encountered humiliations greater than in any German city.” Reubner has said that he differs from other Israeli poets of his generation in that he views things through the prism of Auschwitz while their prism is the nation state that arose from its ashes.

The Shoah theme continues in the next two postcard poems, “Postcard from Pressburg-Bratislava” (Ruebner’s childhood hometown) and “Postcard from Šaštín: Autumn Bonfires.” In Bratislava Ruebner’s grade school teacher shows him a class photo and points out which students became Nazis. Reubner concludes the poem “. . . A very old city./So old I don’t know it anymore.” Šaštín was Ruebner’s grandparents’ home village from which in June 1942 they, Ruebner’s parents and younger sister were deported to the death camps. Today he finds it boring, “. . . Nothing to see. No one/to talk to. Nothing to write about.”

The book’s eight postcard poems are followed by 14 ekphrastic poems based on old master, modern, and unidentified Chinese, Japanese, and Mayan art works. “The Fall” compares paintings of the fall of Icarus by Marc Chagall and Pieter Bruegel the Elder. In Reubner’s first stanza the falling Icarus in Chagall’s painting commands the attention of the townspeople below, while the opposite is the case in the Bruegel inspired  second stanza, which is reminiscent of W. H. Auden’s poem on the same painting "Musée des Beaux Arts.”

Most of Reubner’s poems are in unrhymed free verse, but “Two Zen Pictures” and “Four Japanese Woodcuts: Old Age” employ syllabics, and “With a Blue Headband” and “Black Watercolors” are in regular metrical stanzas that rhyme in Hebrew but not in Katz and Bram’s English except for one instance each of internal rhyme in one and slant rhyme in the other.

In “Black Watercolors,” based on late paintings by the 20th Century German-French abstract painter Hans Hartung, Ruebner returns to the recurring theme of loss in general and his murdered sister in particular:

“A fragmented landscape, as if sewn from rags.

In a voice-not-a-voice the broken water recedes.

The face of my sister flickers among the hills.

The remaining poems are personal and autobiographical. Readers who devoured In the Illuminated Dark will welcome the additional poems in Late Beauty, and for readers unacquainted with Ruebner’s poetry Late Beauty provides a portal.