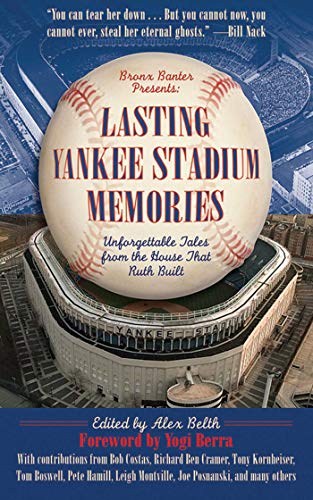 Despite some writers’ claims that baseball is declining in popularity, its hold on American fans has never been more secure. That’s the conviction that readers of Lasting Yankee Stadium Memories will come away with. Deep love of the American national pastime permeates every one of the stories contributed to this book by writers who tell us their most exciting or most touching experiences related to that hall of devotion, Yankee Stadium. And that includes the Stadium’s newest form.

Many of these short pieces display top-level writing, although some are simply presented in plain vanilla. After all, it’s well known that writing short is harder than writing long. The sentimental hyperbole of these little stories makes up for any small shortcomings in style.

Well-known writers like columnist Pete Hamill, biographer Richard Ben Cramer, Bruce Markusen of the Baseball Hall of Fame, Alan Schwarz of the New York Times, Bob Costas of NBC, and Joe Posnanski of Sports Illustrated contribute their special memories to this inviting little book. Often, those memories describe “a moment I’ll never forget” or “an incredible moment,” or tell of an experience that is “as close to an epiphany as I’ll ever come.” Some fans asked to write about their experience find “a flood of memories” to tell about. They often describe times that gave them such unbridled joy that they just had to shout, jump, or even cry from deep emotion.

All these contributors, professional writers or not, show themselves to be deep-dyed fans. For one, the top event in his memory bank is seeing a Mickey Mantle homer; for another, it’s viewing Babe Ruth’s body after death. Many think first of an exciting and unexpected outcome in a World Series game or another game-resolving event. Several tell of their reaction to first walking inside Yankee Stadium and thrilling at its size, colors, smells, and sounds. One described its “soaring white walls” as “magnificent;” for another, that experience is “the feeling of walking into a building and knowing love.”

A few fix their affection to an object, the way Rob Neyer loves the stadium clock with the words OFFICIAL TIME. Neyer claims Fenway Park in Boston has more charm, but he admits he has had a striking experience in Yankee Stadium, one that kept him on edge for nine innings and left him feeling drained.

Several writers do us a service by telling of their first visits to the newly built Yankee Stadium and comparing it with the old, admitting that although the changes might take time to get used to and that they continued to mourn the loss of the old familiar landmark, they were impressed by the improvements of the new building and found a lot to admire in it.

Surprisingly, not all the writers whose pieces appear in Lasting Yankee Stadium Memories love the Yankees, but despite their devotion to other clubs they all respect the Yankee club and make their pilgrimages to the Stadium “to honor eighty-five years of history.” Those who do love the Yankees and the Stadium often find their memories bound up with their families and what always remains the same about them: change. Diane Firstman accepts the Stadium as unrelentingly wrapped up with difficult moments in her family life as well as thrilling experiences like seeing back-to-back inside-the-park homers.

Some insiders tell hilarious stories of player fights, drunkenness, and drug use. Often these vignettes are highly personal. More than one writer has an unflattering incident to tell about owner George Steinbrenner. Another links baseball with religion by quoting a 2001 letter to the New York Times written by a rabbi: “The events of recent days raise some ponderous theological questions. With so much going on in the world, why is God spending so much time with the New York Yankees?”

Reading these pieces, many of them charming, in Lasting Yankee Stadium Memories will make every fan remember his or her special times in this distinctive place of worship in a city that has been a hotbed of baseball for at least 160 years. You’ll think of yours. Sharing those memories with others, as the writers in this book did, makes them even more poignant.