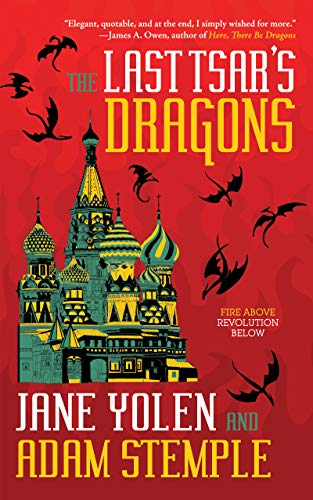 “The Last Tsar’s Dragons does not make for a comforting read.”

This alternate-history novella, written by the mother-and-son team of Jane Yolen and Adam Stemple, explores the end of the Russian Empire in a world with dragons: initially just the dragons the tsar uses to conduct attacks against Jews, then later on the dragons used by the revolutionaries against the tsar.

But anyone looking for the sort of alternate history where events turn out very differently will not find it here. The afterword, titled “A Snarky Note About Dragons and History,” makes it clear that the dragons are meant to embody the violence of the period; after describing the brutal murder of the entire imperial family, the authors say, “Repeat as often as necessary: there were no actual dragons.” The Jewish revolutionary Bronstein worries throughout that his contact with dragons is changing him, stoking his rage and tendencies toward violent thought, and upon seeing what Vladimir Lenin will do with them, he realizes that “Some men are born dragons and some become them.”

The story is told in an almost pointillist manner, assembling the picture through a large set of viewpoint characters for the length of the tale: Tsar Nicholas, his tsarina Alexandra, the “mad monk” Rasputin, the revolutionaries Bronstein and Borutsch, and a nameless bureaucrat who is one of the few invented characters in the story, and who serves as the narrator for the framing elements.

Readers with at least a cursory awareness of the history—enough to recognize Rasputin’s name and reputation—will have an easier time of it, but Yolen and Stemple provide some context along the way (identifying Bronstein, in his final appearance, as the birth name of the man better-known to history as Leon Trotsky), and more in their afterword, where they lay out the actual timeline of the Russian Revolution and identify Borutsch as Pavel Axelrod, the minor character Koba as the future Joseph Stalin.

Although Rasputin plays a significant role in the story, he does not take center stage, as he often does in tales of this period. Grigori Rasputin is a strange and colorful figure, known primarily through the criticisms of his enemies and the exculpatory memoirs of his daughter; as a result, he often risks being more legend than fact.

This novella makes use of those legends, following the version of events where Rasputin survived all but the last of a cascading series of attempts to kill him, but it eschews the temptation to present him as a Machiavellian schemer, supernatural figure, or both. Yolen and Stemple depict him as a true believer, a man of heretical but genuine faith, who thinks God truly has sent him to aid the imperial family. They also embrace the evidence connecting him to the Khlysty sect, which held that one who has thoroughly sinned is better able to obtain forgiveness.

The Last Tsar’s Dragons does not make for a comforting read. The dragons here save no one—quite the opposite—and the narrative is saturated with the problems of the period, from Nicholas’ arrogance, to Alexandra’s rampant anti-Semitism, to Rasputin’s womanizing, to the nameless bureaucrat’s chauvinist treatment of his wife Ninotchka.

The most sympathetic character in the tale is Bronstein/Trotsky, who ultimately is horrified by what he has unleashed, and decides to flee the country as a result. It is a measure of the story’s general mood that the afterword says of the imperial family’s murder, “Death by dragons would have been swifter, cleaner, more merciful, and so we gave that to them.”

But any comforting version of this history would be more than alternate; it would be false. The Russian Revolution was a brutal event that had brutal results, but the regime it replaced was no shining beacon of peace and prosperity, either. Cleaning it up so that one side emerges as heroic and pure would unforgivably distort the truth.

“Repeat as often as necessary: there were no actual dragons.”