The Last Train to Zona Verde: My Ultimate African Safari 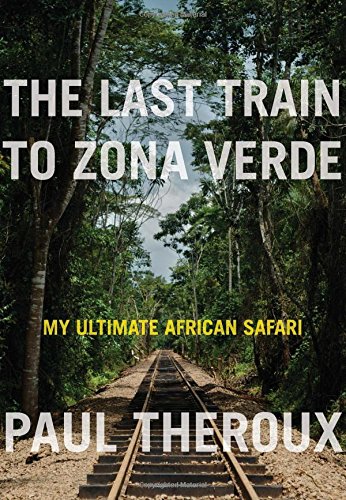 “It is a rich story often laced with irony, the work of a keen observer, full of colorful encounters, an odyssey . . .”

Paul Theroux is in rare company along with Jan Morris and Pico Iyer as one of today’s most celebrated living travel writers.

For over 46 years he has taken us to some of the world’s most obscure places. With him we have kayaked in the South Pacific, journeyed by train from Great Britain to Japan, and trekked from Cairo to Cape Town.

In the process he has delighted and illuminated us. Not content to dissolve into typical misty-eyed travel journalism clichés and hyperbole, Mr. Theroux is part philosopher, part historian and all unvarnished critic. He has been called a grumpy man who seems to derive little joy from his travels but we disagree: Mr. Theroux, now 72, is no misanthrope—he has always been on a passionate mission to be scrupulously truthful and that truth is not always pretty nor is it joyful.

The Last Train to Zona Verde: My Ultimate African Safari is Mr. Theroux’s latest creation, a return and farewell to Africa, the valedictory adventure of an older man who first saw Africa as a Peace Corps teacher in Malawi in 1963 and now seeks to reassess it through more mature eyes after a lifetime of passion for the continent.

It is a rich story often laced with irony, the work of a keen observer, full of colorful encounters, an odyssey that takes him 2500 miles along the Western spine of the continent from Cape Town north to Namibia then into Angola and almost to the Congo.

Mr. Theroux is one brave septuagenarian, vowing to travel by anything but a plane and venturing into terrain rarely seen by outsiders as he penetrates toward the green zone of Angola’s bush, the “zona verde.”

Along the way he meets and tells the story of countless lives and historical incidents in an attempt to reveal Africa’s true but elusive character. The journey is not without sad revelations and hopeless insights that show us much about Africa and about Paul Theroux.

Ever the astute questioner, ever the curious reporter, ever a forthright witness to history and the dilemma of the oppressed, alert to battling political thuggery, he chronicles the crises facing the sub-Sahara.

And who else but Paul Theroux could and would describe the way sheep heads blackened to a smile on a hot grill, his almost spiritual time riding the charismatic elephant with the mahouts of the Okavango Delta and his touching time with three childlike waifs initiated into womanhood in an Angolan village.

This is no typical “Look, a lion . . . we saw orex” tale. Mr. Theroux uses the word safari here as in the true Swahili meaning: a long journey.

He is on a mission in this book to try and understand and interpret Africa and Africans as they grapple with the 21st century. He apparently will talk to anyone and everyone and seems to always come away with a story. His detailed memory is prodigious. Mr. Theroux’s analysis, funny at times, heartbreaking at others is, more often than not, grim and reveals that the effects of rampant tourism, dishonest government and collective amnesia about old honored ways marinated with colonialism have been devastating.

As we bump along with Mr. Theroux in battered buses, unreliable trucks, and patched-up cars, it becomes apparent they are an apt metaphor for this part of Africa: beat up but not beaten; operating, yes, but only intermittently.

And in the end, Mr. Theroux cuts his trip short, ending this safari earlier than planned in a chapter called “What Am I Doing Here.” It is not that he couldn’t go the distance. Ultimately, despair, corruption, crime, hopelessness all coalesce to dampen his spirit.

I suspect Mr. Theroux’s decision to end his journey has a lot to do with a realization after a lifetime of going somewhere, anywhere and everywhere that, as Lin Yutang said, “No one realizes how beautiful it is to travel until he comes home and rests his head on his old, familiar pillow.” For him, as for so many of us, the point of travel is coming home.

The Last Train to Zona Verde: My Ultimate African Safari strives to educate us about modern Africa and artfully prompts many questions on many levels. Is what we see when we travel an illusion? Do we see what we want to see or do we see reality?

In writing his books, Mr. Theroux teaches and forces us to open our eyes and learn. He himself quotes Goethe, “My purpose in making this wonderful journey is not to delude myself but to discover myself in the objects I see.” I suspect there is more to the curious resemblance the name Theroux has with Thoreau who memorably wrote “Give me a wildness whose glance civilization can endure as if we lived on the marrow of koodoos devoured raw.”

Paul Theroux could have written that. But he didn’t have to.

He achieves just as great an insight into the mysteries, rewards, and challenges of African travel with his own powerful prose.