The Last Time I Died 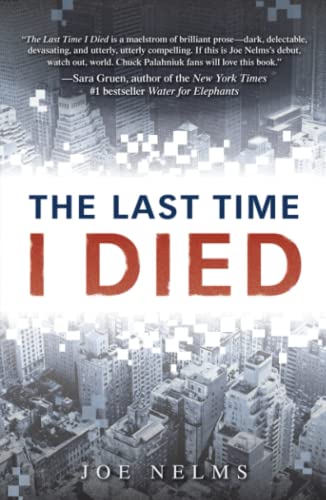 “How this book is supposed to impress intelligent readers is only something that publicity managers can imagine.”

“You don’t have enough time left in your self–satisfied life to listen to me discuss my father. You don’t have the brain power to absorb the complexities of my relationship with that monster.”

Some books tell us more about the publishing industry than they do about the book in question. Joe Nelms’ debut novel appears to illustrates this trend in which publishers plow their resources into making a book a hit. This book’s advance blurbs and publicity are so breathlessly over the top that it cannot hope to match its cheerleaders’ level of enthusiasm.

In Nelms’ world, crudeness passes for humor. “I’m not in Heaven because there’s a tube in my dick. It’s not Hell because the tube would be much larger. Fuck. I’m alive.” Such sentences make one long for real literature.

Then there is this reminiscence of his mother’s murder, recounted without emotion: “My father shot her in the face while she was reading me a bedtime story. Apparently there’s some trauma associated with seeing your mom killed by your father.” Ah, the sophistication of insouciance. A real writer would have probed the meaning of such traumatic events rather than joked about them.

Nelms’ protagonist despairs of divorce. He picks fights at bars. He is beaten to death in one of them, and his life flashes by. The flash portrays all the damage he has inflicted on career and relationships. The protagonist then tries in increasingly desperate ways to kill himself, be revived, and in the aftermath piece together his disjointed parts.

Publicity blurbs tell us, “Joe spent the last twenty years working in advertising, television and film.” And my, how that experience shows in this shallowest of shallow works. The author was also “co-founder, artistic director, producer and director of Live On Tape, a live sketch comedy show that was bought by NBC.” The insipid world of television is supposed to inspire readers of serious fiction? It does not.

Worse in the self–indictment is that “Joe recently sold the reality show ‘Most Ridiculous 911 Calls.’” Really? How this book is supposed to impress intelligent readers is only something that publicity managers can imagine.