The Last Thing She Told Me 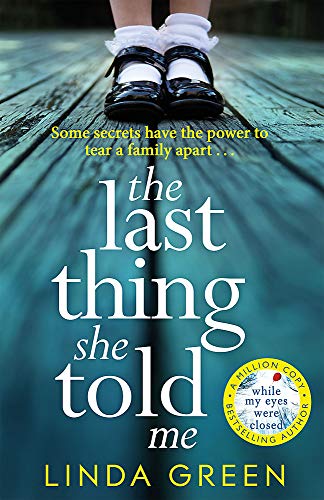 “as the story progresses, the reader finds not merely a mystery but the story of a family cursed to have history repeat itself not once, but three times.”

The last thing Nicola’s grandmother Betty told her before she died was that there were babies in the garden.

“No, Grandma,” I said. “You’ve got fairy statues in the garden.”
“Not fairies,” she said firmly. “Look after my babies for me.”
A second later, she was gone.”

Nicola decides her grandma was confused, her mind wandering in its last moments. It’s only when daughter Maisie finds a bone near one of the fairies, and a little investigation reveals tiny bones buried under each statue that she understands what Betty was trying to tell her.

Of course the police have to be called, though Nicola’s mother strenuously urges her not to. In fact, she’s so vehement that the bones be left where they are that she refuses to speak to Nicola or any of her family about it.

DNA testing proves the children are related to Grandma Betty, but not to her husband. Now Nicola understands why her mother wanted the discovery kept quiet. She knew of the babies’ existence, but how much does she know? Is she aware of the father’s identity?

If this didn’t make tension between mother and daughter, what happens next definitely will. Grandma’s next-door neighbor also has an angel statue in her yard. When Nicola tentatively suggested they dig under the statue, another set of infant bones is found, and the DNA from this little grave points to Nicola’s mother.

The story can’t be kept quiet, of course. The newspapers have a field day, and the neighbors are up in arms, calling Grandma’s home a “murder house,” and Betty the head of a baby-murdering cult.

Nicola knows it isn’t true but how can she prove it? A sheaf of hidden letters chronicling a bittersweet romance, some old photographs, and a mother’s confession show her the way.

“Generations of my family have suffered because of the shame heaped on them. If it’s kept a secret, it becomes something shameful, something to hide from others. But if you call it out, speak it out loud, it’s not a dirty secret anymore.”

Now Nicola has a chance to undo the trouble she’s made, to dissolve the shame her family has carried while she keeps her promise to her grandmother.

She’ll take care of Grandma Betty’s babies, and by doing so, she’ll reveal the truth once and right a great wrong, once and for all.

At first glance, this may seem merely a mystery—Who’s the father of the babies? How did they die?—but as the story progresses, the reader finds not merely a mystery but the story of a family cursed to have history repeat itself not once, but three times. It’s also a story of the lengths people will go to in order to hide what was once considered a social scandal.

Though there’s enough emotion and drama to fill a trilogy of a family saga, Linda Green instead constructs a single novel detailing the struggle of three generations of women tortured by the shame of physical assault and illegitimacy and the double standard society places on such acts.

The Last Thing She Told Me is a book that will keep the reader guessing as to how it will end, and when that end comes, it will be even more of a shock.

Absorbing, emotional, and thought-provoking, this is a novel that the reader definitely will not wish to put down until that last page is reached.