The Last Thing He Told Me: A Novel 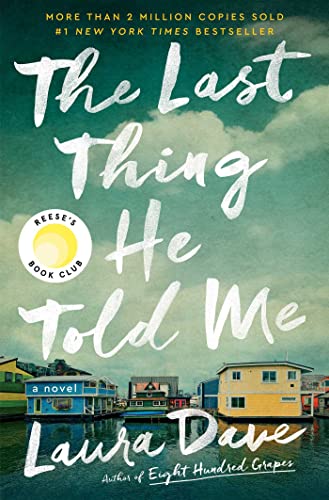 “This fast-paced novel is a nail-biting suspenseful story, dealing with family relationships, love, devotion, personal sacrifices, and the chances parents must take sometimes to save their children from evil.”

Laura Dave has written a heart-pounding mystery about good and evil that is reminiscent of true crime. "This is the thing about good and evil. They aren't so far apart—and they often start from the same valiant place of wanting something to be different."

It starts with a disappearance. Hannah Hall has a good life. Her furniture business is successful, and she has a husband who adores her. The only thing that mars her life is her 16-year-old stepdaughter, who is hostile toward her. Hannah tries to have a good relationship with Baily, but it seems as if everything she tries is wrong. Baily wants nothing to do with her. "There are the obvious reasons why a teenage girl would be averse to her father's new wife, especially Baily, who had a good thing going when it was just the two of them together, best friends, and Owen, her biggest fan." Her mother had died tragically when she was only three years old. Hannah comes home one day to find Owen gone. He leaves a note: "Protect her" and a stash of cash. He doesn't answer his cell phone, is not in the office, and neighbors haven't seen him lately, either.

Grady, a US Marshall, tells Hannah that he and the FBI are also looking for her husband. In addition, Owen Michaels is not the man whom he said he was. Baily reluctantly joins Hannah on her mission to discover the truth. Hannah is convinced that Baily holds the clue to find her father and his true identity.  Owen had told Hannah that he received his mathematics degree in Austin, Texas. So Austin is their first stop. She tries to jog Baily's memory by taking her to a record shop to find Owen's favorite singer and to the football stadium. Baily told her that her father had taken her to football games in Austin. But when they consult the librarian, they learn that there had not been football games for the past several years.

Undaunted, Hannah wants to push on. But Baily has had enough: "Stop? You're the one who said if I remember something we need to track it down, and now you're telling me to stop? Whatever, I'm so freaking done with this." Baily refuses to cooperate. Hannah keeps on thinking of Owen's note: "Protect her." She knows he's referring to Baily but wracks her brain to find out from whom or what he's running. And what it all means. "This is the terrible thing about a tragedy. It isn't with you every minute. You forget it, and then you remember it again."

Meanwhile, the plot gains more intrigue when an inspector from the FBI arrests Owen's boss. They think that he and his boss were involved in a business scam. Hannah refuses to believe that Owen is a crook. She tries to hide these accusations from Baily, who further learns that her father was actually from Seattle, Washington, and went by a different name. Their suspicions and curiosity grow, and Baily begins to cooperate with Hannah because she feels that she's the key to finding out the truth about herself and her father.

Their search leads them to Owen's former mathematics professor who remembers Owen when he had been his student as young man. But he lost track of him since. He sympathizes with their predicament. "Whatever it's worth, I've discovered one thing above else that makes me calm in moments like this . . . Einstein said, so far as theories of mathematics are about reality, they are not certain; so far as they are certain, they are not about reality. . . . It basically means, we don't know shit about anything."

Baily, jogging her memory, suddenly remembers that she had attended a wedding at a certain bar with her father when she was only three years old. She begins to take charge when she finds out the name of the bar and insists on going there alone. She feels that she's closer to the truth about her father and must handle it alone. A young bartender jumps at Baily when she shows him a photo of her father. Hannah runs in and pulls her out. Baily now begins to trust Hannah when she sees that she's trying to protect her and, in seeking the truth about Owen, they are building a future together

There are numerous scary twists and turns after they find out that Owen is not a crook but was involved with a Mafia boss called Nicholas Bell, who is related to Owen's former family. Although the FBI offers immunity to Hannah and Baily, they decide to solve this mystery on their own and run away from the FBI office building. At this point, when Hannah meets Nicholas alone, the story becomes even more nail-biting until the surprising ending. "I sit down with my drink in my hand. But I'm not happy about having my back to the door. I have the thought that someone could walk in and shoot me. One of the bodyguards could surprise me, the dogs could spring to action." However, from this point on, the story becomes a little far-fetched.

Did Nicholas have a choice? Should Owen have listened to Grady, the US Marshall, and not have married Hannah? What made Hannah think that she could trust Nicholas with her proposal? Who was the real Owen and who was the real Baily? Why did Owen suddenly disappear without leaving his wife and daughter his whereabouts?  Did he come back? Read this book to find out.

This fast-paced novel is a nail-biting suspenseful story, dealing with family relationships, love, devotion, personal sacrifices, and the chances parents must take sometimes to save their children from evil.