The Last Storytellers: Tales from the Heart of Morocco 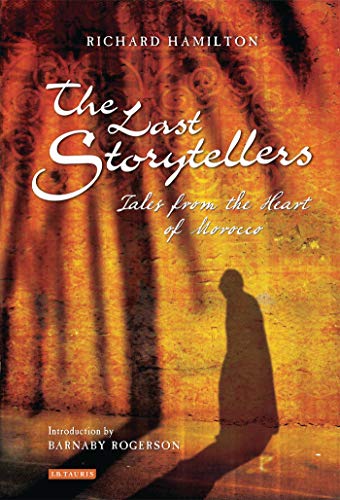 “Hamilton presents readers with a precious gift: a collection of content not quite like anything we’ve heard or seen before. Readers who might never reach Marrakech can find their own oasis by making a cup of mint tea and giving thanks for these enchanting stories rescued from oblivion.”

In an ancient land of rich tapestries and sand-swept desert, of ripe figs and piquant pomegranates, a way of life appears to be dissolving. The old marketplace of Jemaa el Fna, in Marrakech, once swarmed with storytellers regaling young and old. Noting the city’s changing culture, Richard Hamilton has seized the opportunity to record entrancing stories by aging men who have no likely successors.

For about 1,000 years, circles of listeners have met in Jemaa el Fna to share in the storytellers’ spell, to retreat into wild reveries of wealth or fame, to transcend their mundane daily existence, or to restore their faith in justice and righteousness.

Today, the once mysterious square rumbles with manic mopeds and police vans, diminishing both the quality and quantity of opportunities for stories to be shared. Ubiquitous TV and computer screens lure audiences away from the face-to-face verbal interactions of yore. With the vibrant oral treasures of Marrakech becoming extinct, Mr. Hamilton, a broadcast journalist for the BBC World Service, has compiled 37 tales from the few storytellers still living in that city. In doing so, he holds a mirror not only to a fascinating culture but also to a folk literature that explores a range of universal themes.

Echoes of European wonder tales, Biblical parables, and Jewish wisdom tales enliven the stories told by five master storytellers Mr. Hamilton met from 2006 to 2009. The Moroccan storytellers risked poverty, disapproval, even shame, in pursuing a calling that enshrines the culture’s values and wisdom, passed down from generation to generation. Employing their prodigious memory and masterful voices, these men persist in regaling often-illiterate listeners with stories suffused with magic and mystery.

Mr. Hamilton’s method was to record the tales, translated by the multilingual tour guide Ahmed Tija, and to polish the language “where necessary,” all the while staying true to the original plots. In reading the tales—admittedly a different experience than hearing them—one senses an exotic but oddly familiar world.

In the vivid tale of “Aicha Rmada,” readers encounter another Cinderella, aided by her dead mother, who was also the girl’s helper in the Grimm Brothers’ version and in the beloved Russian story of Vasilisa. Some readers will relish the ensuing gruesome fate of the evil stepsister and her mother, while others might be repulsed. Of course, those who desire Disney versions of fairy tales know where to turn; there will be none of that here. Other stories feature more unusual sources of power and change, such as a talking drum that reveals the identity of a murderer, or a bird that lays precious stones and transforms the life of a cobbler.

Themes commonly explored in well-known folktales surface in these Moroccan narratives, as well. Kindness is rewarded, as in “The Traveller and the Pasha’s Daughter,” in which a falcon, an ant, and a swordfish return to assist the man who helped them. (Folklorists will recognize this plot as Type 554: The Grateful Animals, in the Aarne-Thompson classification of folktales.) Humor brightens the tale of “The Two Hunchbacks,” in which the polite man’s hump disappears, while the hostile man’s hump mushrooms.

The quest for true love often involves the undertaking of three impossible tasks, the same magical number featured in European fairy and folk tales. In “El-Ghaliya Bent Mansour,” the suitor who would marry a princess must give her “a kaftan that is not sewn by hand nor cut by scissors, and that will dance when you clap your hands.” With the help of a genie, he accomplishes that, but next he must deliver the milk of a lion. His third and most daunting task is to bring back the apples of El-Ghaliya bent Mansour, who lives at the bottom of the seventh sea in a palace with seven guards keeping watch. The princess shows wisdom in her choice of tests, as the magic apples give the couple a remarkably long and peaceful life.

The rags-to-riches theme, appealing to both medieval and current audiences, occurs frequently. In “The Woman and the Black Cat,” a cat djinn goes out dancing each night and returns with a gold nugget for her mistress. The opening tale of “The Red Lantern” glows with sly humor and irony. Mr. Hamilton’s note infuses this story with even more significance. He writes how the first time he met the storyteller Moulay Mohamed El Jabri he was too impatient to follow this tale to its end.

The story delineates the fate of Kadour, a poor man in Marrakech whose only possession was a small lantern made of tin and red glass. In desperation, Kadour sets out to find another place where his luck might improve. At last, he encounters a dazzling city no outsider had ever visited. There, the Pasha invites the poor man to be his guest. After three fantastic days, Kadour presents the Pasha with the only gift he can offer: his little red lantern.

What a pleasure it would be to join a circle in Marrakech, to listen as the storyteller describes the incredible reward that awaits this simple, good man. And then to hear of the perfect results when Kadour’s smug, materialistic brother seeks the same riches.

How close Mr. Hamilton came to missing this polished little gem. When he returned to Morocco three years later, he found the storyteller still alive and willing to share his repertoire. One cannot help but wonder how many other stories around the world will be lost as technological distractions become the rule. As the pasha does in “The Red Lantern,” author Hamilton presents readers with a precious gift: a collection of content not quite like anything we’ve heard or seen before. Readers who might never reach Marrakech can find their own oasis by making a cup of mint tea and giving thanks for these enchanting stories rescued from oblivion.