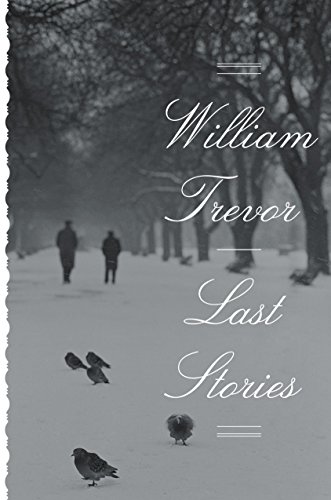 Thoreau’s observation that “The mass of men lead lives of quiet desperation” comes to mind while reading William Trevor’s short stories. The beautifully written tales in Trevor’s Last Stories, now published and collected in book form after his death in 2016, are elegiac and profoundly resonant. Last Tales is a sort of gift from beyond from one of the finest storytellers.

All of the stories in the collection portray characters who are lonely, misunderstood, lost, or stuck in the past, and all possess a mournful, melancholic, quiet tone.

For instance, in “At the Caffe Daria” we meet a woman, Anita, who learns of her husband’s death from her former friend Claire with whom he betrayed his wife. Trevor describes Anita’s reaction to her husband’s death: “Anita is less affected by her husband’s death than she was by his saying that they had made a mistake in marrying. With terrible tenderness he murmured it and then, regret becoming sympathy, offered his prediction: that for her one day there would be someone else too. There never was. She knew there couldn’t be.”

The stories “Taking Mr. Ravenswood,” “Mrs. Crasthorpe,” “Making Conversation,” “An Idyll in Winter,” and “The Women” depict men and women who have been widowed, abandoned, or betrayed by their spouses and lovers and are pained by and nostalgic for what they have lost. These are tales of people who long for their youth again and circle back repeatedly to what might have been.

A master of understatement and elegant, pithy prose, William Trevor creates an air of ambiguity and leaves it to readers to put the pieces together of his characters’ situations. In “An Idyll in Winter” the narrator relates how Anthony abandons his wife Nicola and their children for Mary Bella, a girl he tutored many years earlier. Trevor writes of his return to Mary Bella, “He had come back.” This is followed by, “But when Anthony returned he went at once to the house, and after that he always did.”

After a paragraph break, the narration shifts to Nicola: “Nicola lived with her bewilderment, aware that it wasn’t much to have to live with.  Yet each morning when she woke she felt uneasy, and yet didn’t want to think.”  At this point the reader is fairly certain of what has transpired, but the narrator only explicitly states that Anthony is leaving his wife two pages later: “In the dead time of a Sunday afternoon Anthony told the wife he had once loved that their marriage, unchanged for her, had become for him a mistake.”

A number of the stories have two narratives or main characters whose lives intersect. Trevor jumps back and forth giving the perspective of each character, gradually and deftly putting the pieces together. In “The Women” he opens with a description of Cecilia and her father, who was abandoned by his wife. A bit later, the narrative shifts to the story of two middle-aged eccentric women who seem to be stalking Cecilia when she is at boarding school. Like a mystery, the narrative moves back and forth between the two stories until we learn how all of the characters are connected to one another.

A former English professor once commented that she always sighed when reading the works of John Keats, who died so young. Although William Trevor lived a long and productive life, I sigh when when reading his tales and sigh especially for Last Stories, perhaps the final published words from such a magnificent and moving writer.