Last Stop Auschwitz: My Story of Survival from within the Camp 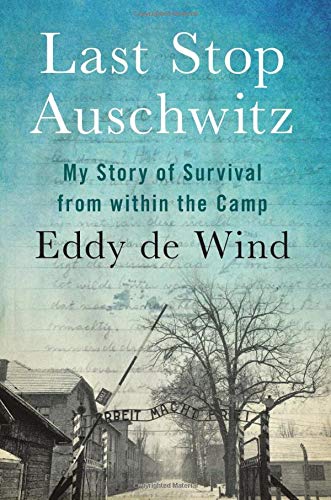 Although this is an English language reprint of a memoir originally published in 1946, it shouldn’t be terribly surprising that it still has considerable relevance as a first-person account from an Auschwitz survivor. What is surprising about this book is the fact that it was written by the author as seen through his eyes but represented by a fictional “Hans,” in prose that almost gives the reader the impression of being a novel of fiction which, unfortunately, it is not.

In addition to having survived the concentration camp system himself, it is just as amazing that his wife did so as well despite having been the subject of the Nazis’ test experiments on human beings. With the sexes segregated in the camp, it was largely forbidden and difficult most of the time anyway for the married couple to be able to find time to spend together. Just as difficult was the near impossibility of being able to look out for each other’s survival within the camp.

As Dutch Jews, both he and his wife were most certainly on the Nazis’ radar screen. Indeed, he volunteered in 1943 as a medical doctor to work in a Dutch transit camp in an ultimately vain effort to prevent his mother from being deported to a camp in the east. Given that the Final Solution had been implemented the previous year, it shouldn’t be surprising that the Nazis didn’t keep their word regarding her status.

As “Hans” and his wife were deported to Auschwitz, they managed to avoid the initial “selection” fate of so many upon arrival there: He because of his medical expertise and she as a result of being young enough to be included in the horrific experiments where the primary effort, among others, was how best to efficiently mass sterilize those “sub-humans” who the Nazis considered unworthy of reproducing in their racially pure society.

Even still, one could be selected for the gas chambers at any time or even transferred to another camp, as “Hans” was to Birkenau for a short period, for any violation of camp rules. That he survived that camp is yet another testament to his will and determination to live and get back to his wife, especially when one considers the lack of sanitation, personal hygiene, and medicines to treat the many diseases endemic to the camps.

With the Russians drawing nearer from the east, the Nazis tried to eliminate all evidence of their activities and keep the inmates from being liberated by forcing them on death marches to other camps to the west. In the midst of the confusion, many were left behind, too sick to be moved, or escaped to roam the countryside which is what “Hans” did while his wife initially disappeared on her own death march.

Liberated by the Russians, “Hans” worked with them until the end of the war and returned to the Netherlands in late 1945 where he was ultimately reunited with his wife. Tragically, he suffered from camp-related PTSD as a result of his experience, and they separated in 1957. On the plus side, he did remarry, had a son, and eventually became a recognized mental health professional.

There are no maps included so one will have to go online to locate the venues referenced in the text. The photographic section is mostly of family and postwar photographs as well as two of the text in de Wind’s original notebook which was written immediately after his liberation by the Russians in between his periods of treating the sick and wounded.

Helpfully and creditably, there is a glossary of translated German and Polish terms and expressions from the text, a note from the author’s family that is meant to answer some of the lingering questions readers might have, an essay by de Wind  that references his “confrontation with death” as well as a note by the translator, David Colmer, in which he explains his efforts to remain true to de Wind’s original language. Of course, there are no notes or an index.

Needless to say, we need all of the first person accounts we can get in order to debunk any notion that the Holocaust never happened. Notwithstanding the unusual writing format referenced above, this is yet another eyewitness look at how the will to live, and love, can overcome the privation and degradation inflicted by the worst totalitarian regimes.