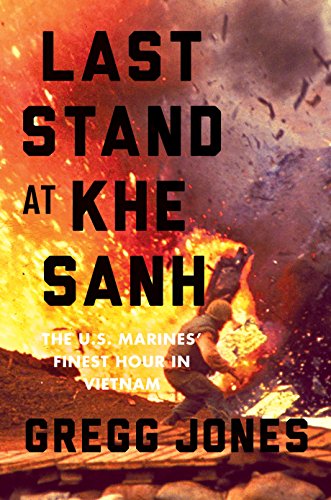 “Although the true strategic and tactical success of the American stand at Khe Sanh will continue to be debated . . . the courage and sacrifice of the 6,000 American Marines who held the base is undisputed . . .”

Nearly 50 years after the first American troops were committed to combat in Vietnam the war continues to generate both fascination and controversy.

Gregg Jones dives into this debate with this new book that examines one of the most deliberated battles of that war, the siege of Khe Sanh in 1968. Relying heavily on interviews with veterans of the battle, he makes the case that the battle was a major American victory and one of the signal battles in the long history of the U.S. Marine Corps.

Jones does an excellent job describing the desperate close-quarters combat in the hills and jungles surrounding the base as Marines and North Vietnamese soldiers wage desperate battles for decisive terrain that would allow the North Vietnamese Army (NVA) to blockade the base and choke off the vital airlift of supplies needed to keep the base functioning.

His use of veteran narratives shows both the terror and courage exhibited by the Americans trying to survive not only the almost daily shelling and threat of NVA assault, but shortages of food, water and other basic necessities as the ability to use helicopters to keep the hilltop outposts supplied became in doubt.

A strong point of the book is the addition of the entire campaign action around at the base, including the first use of armor by the NVA to overrun the Special Forces camp at Lang Vei and the capture of the village of Khe Sanh by the NVA in the early days of the Tet Offensive.

Both of these actions were viewed as major battlefield defeats by the U.S. and South Vietnam and contributed greatly to the overwhelming alarm of the Johnson Administration that three NVA divisions might overwhelm the surrounded 6,000 Marines.

Jones argues, with some success, that the 77-day campaign surrounding the base was a vital part of the 1968 Tet Offensive, launched by North Vietnam’s vaunted warlord General Nguyen Giap to achieve a decisive victory over the South Vietnamese government. He argues that Giap was intent on replicating his pivotal 1954 victory over the French at Dien Bien Phu that forced the withdrawal of France and the creation of Vietnam as two independent countries.

Historians have long debated whether Khe Sanh was intended to be a decisive conventional victory over American forces or a mere diversion to draw American troops out of the cities of South Vietnam that were also a major objective of the 1968 Tet attack.

Jones also does an admirable job of describing how the battle was viewed at the strategic and political level, assuming a stature far outweighing the actual operational or tactical value of the outpost. For a brief period in early 1968, the commanding general in Vietnam, General William Westmoreland, and the defense hierarchy of the Johnson Administration explored the potential use of tactical nuclear weapons to prevent the base from being overrun.

How seriously this contingency was considered may never been known as these studies were quickly terminated when hints of the plan became public. More importantly, he describes the frustration many of the Marines felt when the base they had fought so hard and sacrificed so much to hold was later abandoned as strategically obsolete later in 1968 as the American forces in Vietnam received a new commander and a new strategy after President Johnson announced he would not seek re-election in 1968.

Finally, Jones comes full circle for the battle by providing a poignant epilogue that describes how for many veterans of the battle, their wounds lasted far beyond the end of their tours in Vietnam.

Many of the returning Marines suffered from undiagnosed PTSD which caused divorce, alcoholism and even suicide as they returned to an indifferent nation divided over the righteousness of their cause and unmoved by their struggles to deal with what they had seen and done in combat. His telling of how Khe Sanh veterans eventually sought each other out for remembrance of their fallen comrades and support of each other truly shows how the brotherhood of combat stands the test of time.

The book has adequate maps and some really excellent illustrations shot by photojournalists at Khe Sanh showing the daily life of Americans at the base, both the humorous and tragic. Although the true strategic and tactical success of the American stand at Khe Sanh will continue to be debated, especially as the 50th anniversary of the battle draws near, the courage and sacrifice of the 6,000 American Marines who held the base is undisputed and Khe Sanh truly should take its place alongside Iwo Jima, Tarawa, and Guadalcanal as one of the Marine Corps’ gallant battles.