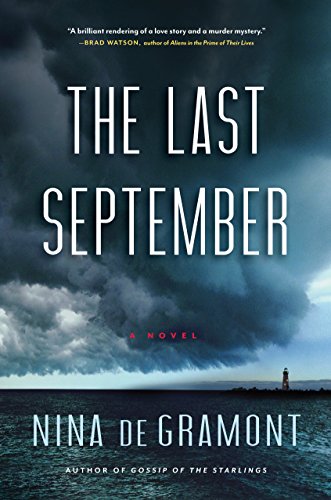 “the secret to marriage [does] not lie in compatibility, or even commitment, but the willingness to endure heartbreak.”

Nina De Gramont’s The Last September is certainly full of enough heartbreak to fill this bill.

Wife, mother, and American Renaissance scholar, De Gramont’s protagonist, Brett, chooses to begin her story in the middle, in medias res, with the murder of her husband, Charlie. De Gramont has chosen a story structure singularly suited to the above thesis, because it introduces the “singular moment in time” around which Brett’s life revolves, and helps to put revelations about the past in perspective. Indeed, despite the categorization of this book as suspense, this story is as much about marriage as about murder.

In the first chapters, De Gramont introduces her main characters: weary, driven Brett, charming Charlie, troubled Eli. She does a marvelous job over the course of the story in revealing each of them as much more than their initial introduction, though; they become “real” people as De Gramont slowly pulls back the layers of each personality and exposes how each cares for and disappoints all of the others in her tale. Brett is driven, but she’s also needy. Charlie might be charming, but he’s also careless. Eli struggles with mental illness, but he is perhaps the only reason Brett and Charlie ever met or married.

In crafting such believable characters, De Gramont encourages the reader to be enchanted with the man or woman on the page; it is shocking and absorbing, then another page is turned and a new revelation about their lives or relationships is revealed. It’s a constant reminder that what one sees is not often all there is to know about the ones with whom one interacts. In a way, the story and characters are reminiscent of Gone Girl, but DeGramont accomplishes her end with a far more deft hand. It is not through grand, crude gestures that the characters of her people are revealed, but through everyday acts. It’s quite brilliantly done.

The Last September is robust with strong secondary characters, as well. Brett’s ex-fiance, Ladd, and his uncle Daniel are particularly engaging. All of the lesser cast have important roles to play, though. It’s refreshing to read a novel free of “place-keepers” and stock personalities.

It is only in the denouement that the story stumbles. The killer, when that person is revealed, is a puzzler. There is very little that would lead a reader to accept that person as the murderer. The story appears to have been conceived with a different assassin in mind (or perhaps no murderer at all). Perhaps in pursuing the “high-concept” novel that is so prevalent lately, the author changed her story.

“I had crafted a murder mystery where there seemed to be none,” Brett reflects, and perhaps that could be applied to the touted thriller aspect of this novel. Regardless, The Last September is a wonderful early fall read. As a picture of a marriage struggling under the weight of expectation and mental illness, it is nearly flawless. De Gramont should be proud.