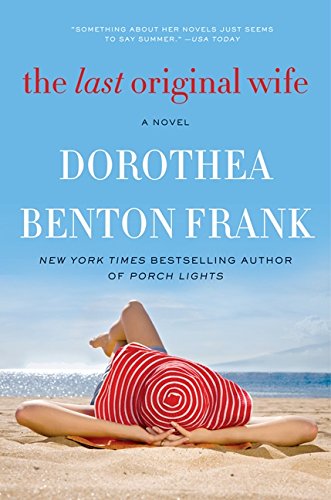 Dorothea Benton Frank’s The Last Original Wife presents her appreciation of the “baby boomer” generation by handling with empathy, humor, and absolute finesse the sensitive situations and the uncertainties confronted by women d’un certain age.

Spunky Leslie Carter seems content as a wife and mother, but as she segues out of middle age and toward her 60s, she contemplates her existence. Facing her 30th wedding anniversary, she is shocked and dismayed by her husband, Wes and her two grown children, now seeing them in a different light. Son Bertie lives in an ashram in Nepal subsiding on money Wes contributes. Charlotte, a single mom and a realtor, more often than not is barhopping.

Wes is a tightwad corporate hotshot who thinks nothing of being extravagant when it comes himself. Though he provides an elegant home and country club membership, he treats Les as his personal slave, expecting her to cater to his every need while allowing her a pittance of a budget.

The Carters socialize often and are best friends with two other couples: Tessa and Paolo Ferretti, and Danette and Harold Stovall. When Tess succumbs to cancer, Les questions her own mortality and value, especially after Paolo quickly marries a much younger woman. Then Harold admits to an affair and proceeds to dump Danette to marry Cornelia on Valentine’s Day.

Things come to a head for Les when she, Wes, Harold, and Cornelia travel to Edinburgh so the men can challenge the links at the Old Course at St. Andrews, world famous for golfers. Les is hospitalized after an accident and much to her distress, Wes accuses her of ruining his vacation—though he refuses to give up his tee time.

Les cannot tolerate the two “replacement” wives whom she refers to as The Barbies. “I was sick to death with feeling bad about not being some hot number with a fake tan, straight hair, and a bald you-know-what. (I still don’t understand that last one.)”

Throughout her social contact with these ditzy women, Les keeps her humor while finding the absurdity in her situation. Not only are these women arm candy, they are also airheads. She informs Wes she will not socialize with them, and he turns nasty insisting she comply with his wishes.

A vivid indicator of how petty and childish some men can be, a livid Wes screams at Les after the two young wives get into a fight at the club, thinking she should have controlled the situation. When Les leaves him there alone, he cannot understand her and questions, “Who the hell knows what women think?”

Tired of being manipulated by her children and her cheapskate husband, Les decides to visit her brother Harlan in their hometown of Charleston. Prior to making her sudden departure, she discovers something Wes is keeping from her.

Harlan throws a party in her favor and invites Jonathan Ray, her high school sweetheart, where she relives the blissful times they shared. Though experiencing guilt, Les is relieved to be away from Georgia and Wes: “. . . how terribly sad it was that my marriage was coming to an end. . . . My personal unhappiness and deep feelings of unfulfillment doesn’t seem important enough. But wasn’t that how women of my generation had been programmed?”

Written in the first person, The Last Original Wife mixes the captivating history and distinctiveness of the South Carolina Low Country with a story about existential contemplation in a pleasant and readable fashion.