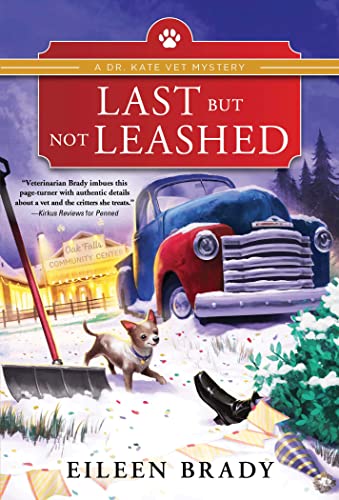 “Readers who are not familiar with Eileen Brady’s work will become big fans. Let’s hope there is something more in the works for Dr. Kate Turner.”

Put together a veterinarian clinic, pet dogs and cats, several murders, and whole bunch of suspects, and what do you have? A great cozy.

Eileen Brady’s new book, Last But Not Leashed is just the ticket for a good read. Her protagonist, veterinarian Dr. Kate Turner, is on a temporary assignment at the Oak Falls Animal Hospital in upstate New York, in the dead of winter, when the murders start.

Brady intertwines a failing romance, a seriously injured pit bull, a bunch of rottweiler puppies, their dad, two murders, and a screaming little chihuahua into an exciting mystery.

It all starts when Sookie Overmann, the owner of an organizing business who gives presentations on how to organize one’s life, is found dead outside of the Oak Falls Community Center after one of her programs. It is, of course, Dr. Kate who discovers the body.

Oak Falls is a small town and its citizens each have their own theory regarding who the most highly ranked suspect is—the husband, Glenn Overmann. He is a nasty piece of work and insists on his innocence. But the town is adamant—he must be the killer.

It’s New Year’s Eve and the town’s residents are gathered for a party to ring in the new year, when Posey, a local woman who works at the gas station/convenience store, takes a nosedive from the rafters of the Hay Barn Gallery at the party.

Kate can’t help but wonder if the two deaths are connected, although Sookie was definitely murdered, and Posey’s demise looks like suicide. Still, Kate wonders and begins to look for a connection.

Early in the story, Brady introduces Luke, Kate’s love, and yet the romance seems to be off the bloom, and it doesn’t take long for her to realize that Luke has interests elsewhere.

As Kate moves through her investigation, thoughts of Luke and his unkind breakup with her continue to surface at the most inconvenient times. When Luke reappears, Kate makes short work of him, and the reader is left with a satisfying end to that entanglement.

At the same time, a badly injured pit bull is dropped at the vet hospital in the middle of the night and with it, another mystery. The dog, now named Mr. Pitt, is the subject of another investigation. Who does this dog belong to? The idea of dog fighting is neatly tucked into the story as Kate fears that someone might be ready to reconnect with Mr. Pitt, at any price. Kate soon recognizes a teen, Lucky Heally, who has a close interest in Mr. Pitt, and she wonders if he placed the dog at the hospital.

Kate’s associates, Cindy and Mari, assist with the investigation as conduits of town information and gossip. Cindy also happens to be related to the town police chief, Bobby Garcia, and she easily finds information otherwise unattainable.

With Luke out of the way, a local artist, Colin (handsome and charismatic) makes his way into Kate’s life. He is popular with the females of the town, and Kate keeps her distance.

Brady does a good job of bringing other characters into the crosshairs: Rainbow, Luke’s cousin who happens to be a tech wiz; Chloe Ramboulle, a lovely young actress; her husband, Arthur Gambino, a fabulously wealthy man; two bodyguards who don’t let Chloe out of their sight; and Elaine, Sookie’s assistant who takes over the business after Sookie’s death.

Town talk wonders if Arthur is a mobster and his thugs hitmen. Stories begin to grow like dandelions in spring. “More and more details fell into place. No one was chasing Lucky. Gangsters hadn’t moved into town. Glenn Overmann most likely killed his wife. And Posey? The police say she committed suicide. Was it coincidence that Chloe’s husband thought these two local women may have stolen his Bitcoin? Two women who now were dead? It felt like one coincidence too many.”

When Kate had met Posey at the Circle K store, she learned that Posey was writing a novel, “. . . some kind of Edwardian, sci-fi vampire novel.” Kate recalls Posey’s last words about her story, “Knowledge is power. And power means money.” It isn’t until Kate discovers a set of four notebooks that belonged to Posey, that things look like they might start to fall into place.

Kate begins to read the convoluted story that seems to be more stream of consciousness than a solid story, but she sees connections between the characters that Posey had created, and some real life people in the town.

Brady brings the requisite climax scene up to an exciting pitch, bringing the real culprits to pay the price, and throughout the book she has dropped enough clues and red herrings and foreshadowing to give the reader just enough information to . . . well, maybe figure it out.

A satisfying ending to a good, well-written cozy—the kind you can curl up on the couch with on Friday night and put it down on Sunday morning.

Readers who are not familiar with Eileen Brady’s work will become big fans. Let’s hope there is something more in the works for Dr. Kate Turner.