The Last Night Out: A Psychological Thriller 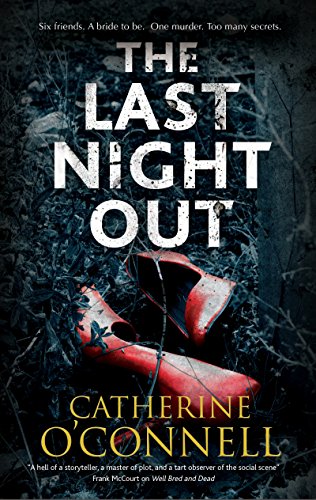 Maggie Trueheart, bride-to-be, is taken on a last night out by her five best friends, Angie, Suzanne, Carol Anne, Kelly and Natasha. It’s a night she’ll never forget, but the morning after is her worst nightmare, even without the hangover.

Maggie wakes up in bed with a stranger she picked up in a bar.

Steven Kaufman had an ulterior motive for intruding into Maggie’s group but after last night, he knows he has to see Maggie again, and again.

Wracked with guilt over her infidelity as well as her attraction to a man her fiancé’s exact opposite, Maggie’s even more shocked when she gets a phone call from Kelly telling her that Angie has been murdered.

In the following investigation, facts about the surviving friends reveal everyone has secrets:

*Suzanne is having an affair with an influential businessman on the verge of leaving his wife and family for her;

*Carol Ann’s husband is having an affair of another kind;

*Maggie is seriously thinking of dumping her fiancé for Steven who is becoming an obsession;

*the investigating detective’s interest in Kelly isn’t only about her involvement in the case.

The tangled web the friends have woven around themselves will tighten into a stranglehold, for all the things they are hiding are somehow connected to Angie’s death.

Eventually, the killer will be discovered, but the devastation that discovery leaves behind will change everyone. Forever.

Though the story is told mostly from Maggie’s first-person point of view, each member of her group is highlighted in subsequent chapters, allowing them to pose their own observations of what’s happening. After the murder is solved, the author takes us a step further than most writers do. Instead of merely ending the story at this point, she offers two epilogues taking a unique position. Instead of merely explaining what happened to the survivors, they answer questions previously asked while also raising more. The reader is left to make his own conclusions about what did or didn’t happen, and will no doubt see the irony in Maggie’s final choices.

Catherine O’Connell has written a detailed and deftly plotted thriller that is as much a romance novel as it is a mystery with several twists. It’s doubtful even the most canny reader will guess the culprit until the tense final chapters, and the revelations in Kelly’s part of the epilogue will stay in the mind for a long time.