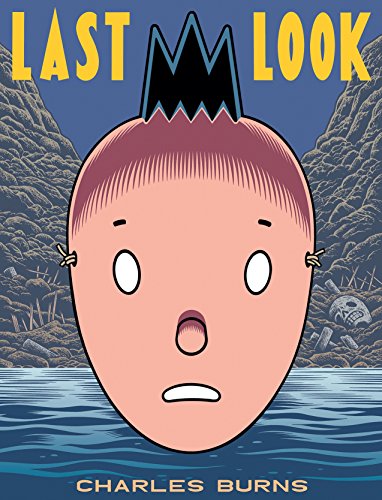 “Last Look is a cold indictment of pretentious frauds yet an intimate exploration of fear, regret, and failure.”

Doug wakes up from his slumber and hear the buzzer from downstairs. With the clean lines reminiscent of the Hergé hero Tintin, Doug wanders around a dream world that resembles Interzone from Naked Lunch. Last Look by Charles Burns is a fever dream double portrait of Doug. It tells the story of Doug and his weird fantasy world, filled with foul-mouthed lizard men and arcane rituals centered around an enigmatic hive. In reality Doug is a wannabe artist infatuated with a troubled art student named Sarah. Last Look brings together three separate graphic novels into a hallucinatory yet heart-wrenching trilogy. The graphic novels were X’ed Out (2010), The Hive (2012), and Sugar Skull (2014).

Charles Burns has been in the comics business for decades. The legendary comix magazine RAW featured Burns along with other noteworthy comics artists like Art Spiegelman, Gary Panter, and Mark Beyer. RAW cast its net wide, bringing together artists with punk rock aesthetics and international artists. From 1980 to 1991 RAW kept the torch burning for aspiring and established comics artists with a notable weirdo punk aesthetic. RAW also serves as a literary skeleton key, providing an aesthetic refuge and means of expression for the post-R. Crumb underground comix scene. The magazine, with Art Spiegelman and Françoise Mouly as editorial leads, helped cement the graphic novel as a legitimate, literary art form.

RAW helped each artist establish his or her voice. Spiegelman had Maus, Gary Panter had Jimbo, and Mark Beyer had Agony. Charles Burns’ particular style revolved around B-movie monsters and teenage sexuality. Despite the lowbrow subject matter, he brought an emotional intimacy similar to that of Daniel Clowes (see Ghostworld, David Boring, and Like a Velvet Glove Cast In Iron). Last Look follows Doug’s life from teenage artistic aspirant to the brutal realities of middle-age and dashed ambitions. It is a portrait of the artist as a pathetic loser. But Burns creates an atmosphere of menace both in the real and fantasy worlds Doug inhabits. In reality Doug finds out about Sarah’s psycho ex-boyfriend. In the fantasy world, Doug has to deal with lizardmen and not venturing into the forbidden areas of The Hive.

Last Look further complicates Doug’s life when the real world and fantasy world begin bleeding into each other. The comparisons to David Lynch are apt because the storytelling becomes more and more muddled. Reality and fantasy become less easy to distinguish. Real-life Doug dabbles with drug use while the other Doug seeks the new hive “breeder.”

Some of the symbolism is, superficially, a little too on the nose. In the fantasy world, Doug meets Lily, the new breeder, and assists in her birthing process. It is an episode of body horror in the spirit of David Cronenberg. At the same time, Doug falls out of his relationship with Sarah. Fear of commitment, fear of fatherhood, and other domestic terrors propel Doug to break things off. Yet Last Look is not diminished by these rather obvious symbolic parallels. More things are at stake in the book.

As the narrative draws to a close, the symbolism and personal desolation bring to mind the works of Marcel Proust. Memory, fantasy, jealousy, and regret intertwine into a sincere conclusion that feels earned. An urgent relevance can also be associated with Last Look, since many young people struggle valiantly to find work yet also search for personal meaning in their lives. What is worth sacrificing in the name of artistic ambition? Were the right choices taken? Last Look is a cold indictment of pretentious frauds yet an intimate exploration of fear, regret, and failure.