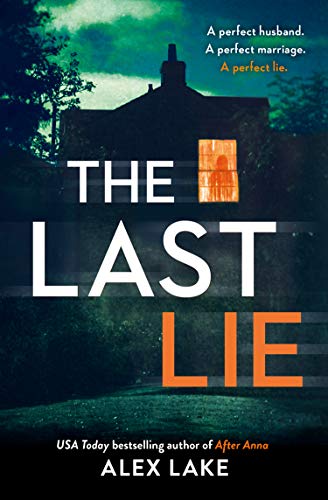 “a page-turner from the onset.”

"The young woman stared at her, her eyes wide and unseeing. Her hair was matted, and she was streaked with dirt. She took a step towards the car, and

the driver flinched, glancing around to see if there was anyone hiding in the shadows . . .

The riveting and powerful prologue to this novel set in England, grabs the reader from the get-go with suspense and tension escalating up to the conclusion.

Claire Daniels, married to Alfie for three years, desperately wants to have a child. She is distraught every month when she is not pregnant. She adores Alfie and believes he is also heartbroken, so she seeks the help of Dr. Singh, a fertility specialist. He performs tests showing there is no reason she is cannot conceive. Though Alfie allegedly had been tested, stating he is fine, she pleads with him to go to her doctor to determine what is causing their problems.

Even with this letdown, Claire couldn't be happier. She is a partner in a design firm, and she and Alfie are in love. Having lost her mother at a young age, her wealthy father bestows on her a gorgeous house, vehicle, and anything she would ever want or need.

Alfie acquiesces and sees Dr. Singh to whom he admits having had a vasectomy. He insists the doctor dismiss Claire as a patient and to keep his information confidential under the dire possibility of punishment. Claire returns to the doctor, and he doesn't mention Alfie's deception but implies it.

Upset and disbelieving, Claire confides in her best friend Jodie, who sympathizes with her; however, Jodie is concerned about her pal, Pippa. Pippa had unburdened herself to Jodie when her lover, Henry Bryant, dumped via a text message. Now Pippa is missing, which worries Jodie.

Claire does not confront Alfie about his sterility but says Dr. Singh states his sperm count is low. Alfie, afraid his secret will be revealed goes on a drunken spree staying out all night. When he comes home, Claire casually discusses other alternatives to have a baby with him not letting on she knows the truth. Claire's mind is in a whirl, yet Alfie appears open to the options:

"Despite the disappointment of the sperm test, she was happy. The world seems suffused with a warm glow. It was like her memories of Christmas as a child: everything warm and light and peaceful.

"It was because she knew how fortunate she was. Some men would have been threatened by the idea of a sperm donor, their male ego unable to take the idea of their wife becoming pregnant by another man, even if it did not involve him having sex with her. They'd prefer to adopt, or even remain childless. And she had seen something of that in Alfie, but he had put it aside and agreed they could look into it. . . .

". . . That was how he was. Selfless, thoughtful, committed to their marriage."

But was he? What is Alfie up to, and how could Claire be so dense? Is he such a good a manipulator and she so besotted by him that she cannot realize he is a scoundrel?

Alfie loves the life he is living with Claire allowing him to show he is someone to be respected, all because of being Claire's husband. A ne'er do well, he leaves Claire unknowing of his sordid past, though he has duped her into believing he is a true gentleman and lives only for her. But as time passes he begins to hate Claire and devises another persona, one totally unknown to Claire.

Before long, Claire becomes aware of his duplicity, but will she beat him at his game? Is Claire really as obtuse as Alfie thinks she is, or will she show her hand at his deceit? Both Claire and Alfie present their own voices in separate chapters making The Last Lie a page-turner from the onset.