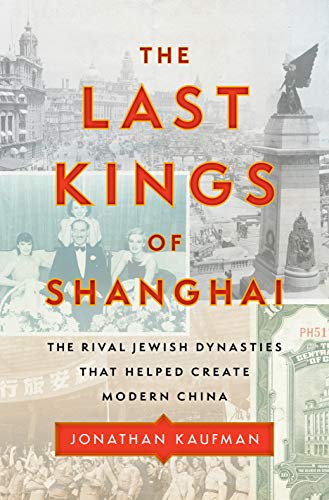 For novelists, filmmakers, and writers of popular history, Shanghai in the years between the two world wars is irresistible.

“Shanghai was China’s melting pot, the crucible in which all the forces that shaped China—capitalism, communism, imperialism, foreigners, and nationalism came together,” Jonathan Kaufman writes in his engrossing new book, The Last Kings of Shanghai: The Rival Jewish Dynasties That Helped Create Modern China.

Kaufman spins his tale of two Baghdad Jewish families, the Sassoons and the Kadoories. In a period of Arab persecution under the Ottoman Empire in the early 19th century, they migrated first to Bombay, India, and then to Shanghai.

From the book’s Introduction, it is clear that the reader is in sure, seasoned hands.

Kaufman is a former Wall Street Journal reporter and bureau chief, a Pulitzer Prize winner whose on-the-ground experience in the Middle Kingdom stretches over four decades. This period includes such pivotal points of history as the U.S. historic opening with China in the late 1970s through the aftermath of the 1989 Tiananmen Square demonstrations and their brutal suppression.

In his own excellent, 2018 book, City of Devils: The Two Men Who Ruled the Underworld of Old Shanghai, Paul French included a dozen Jewish gangsters, including one bodyguard and would-be warlord known as “Two Gun Cohen.”

Kaufman’s new book features a more respectable cast of Jewish buccaneers and altruists, a series of colorful merchant princes whose entrepreneurial skill—most were multilingual, except for some reason, rarely in Chinese—generated almost unimaginable wealth and luxury.

Kaufman doesn’t disguise, excuse, or sugarcoat the way the Sassoons made their first Chinese fortune. It was built on exporting (and later smuggling) opium, which required bribes and, sometimes, hired muscle.

“The Sassoons knew the toll opium was taking on the health of Chinese workers,” he writes.

By the time the opium trade went away, the Sassoon and Kadoorie families had diversified into banking and finance, import/export, commercial real estate, and hotels. All with incredible success.

The other pillars of their early fortunes were textile mills in India and China, where, Kaufman writes, the Jewish factory owners had a reputation for treating their workers relatively well.

In addition to their original properties in Baghdad, the families invested some of their Asian profits from India and China in England.

“The Sassoons were in many ways the first globalists,” Kaufman writes.

Along the way, there were some missteps. Both dynasties had their ups and downs, feuds and splits. Each repeatedly thwarted the feminist ambitions of the families’ gifted women.

And the families’ path to riches in the British colonial regime in China was not unhindered: “Their own Jewish background complicat[ed] how they navigated among these different worlds.”

For decades, they chafed at English snobbery and anti-Semitism.

Yet when it came to Judaism, as a faith and an ethnic identity, the dynasties were ambivalent, almost quixotic. They built synagogues, but rarely went to services. Later generations were highly assimilated, yet there remained a curious insularity. They preferred that male family members marry Jewish women with Baghdadi roots.

Still, both families acted magnificently in the late 1930s and during World War II, caring for 18,000 desperate, escaped Jewish refugees from Nazi Germany and Austria who found Shanghai, which did not require entry visas, to be their last hope.

At great personal cost, the Sassoons and the Kadoories provided food, shelter, clothing, education, job training, and recreation. They shielded their charges from a unit of the SS dispatched from Berlin to exterminate them.

Despite their wealth and privilege, several dynasty members who did not flee China before Pearl Harbor spent the war years in brutal Japanese internment camps.

For Victor Sassoon, heretofore known mostly as a bon vivant and playboy, Kaufman writes, caring for the refugees was “the moral high point of his life.”

In other times and places, the excesses of colonialism and capitalism moved some Jews toward socialism. Not David Sassoon, his family’s scion, who expanded their commercial empire from Baghdad to Bombay, and then to Shanghai. For years, he dressed in the robes and turban of his native city and wore a generous beard.

As he amassed a fortune, David developed a model of philanthropy and social change that would become a familiar paradigm in the two centuries that followed, around the world.

The Sassoon patriarch exemplified “the liberal Jewish businessman whose skills and talents led to fabulous financial success, but whose history of personal hardship and commitment to Jewish values made him more socially and politically progressive.” (Think George Soros and Tom Steyer, whose father was Jewish).

However, there were limits to the dynasties’ progressivism.

Even before the bloody, abortive communist uprising in Shanghai in 1927, the Sassoons and the Kadoories cast their lot with Chiang Kai-shek’s Nationalist Chinese Kuomintang Party. It was the smart, percentage bet in the short term, but not in the long run, as things turned out. They were, as one family acknowledged “on the wrong side of history,” as well as Mao Zedong’s Communist revolutionaries.

Understandably, and unavoidably, the narrative loses some momentum after the 1949 Communist victory, in which the Sassoons lost an estimated half a billion dollars in seized assets.

But by the time of the Nationalists’ defeat, and their flight to Taiwan, the Kadoories had wisely moved much of their family assets from Shanghai to Hong Kong, a British crown colony.

In the post-war era, one Kadoorie brother, Lawrence, helped restructure the devastated colony, using as his financial base the China Power and Light Co.

Another brother, Horace, threw himself into agricultural resettlement for refugees from Mainland China, assisting many with what would later become known as “micro-loans.” By 1962, it was estimated that 300,000 refugees had benefited from $60 in micro-loans.

Thanks in large part to their assiduous cultivation of the Beijing government, the Kadoorie family’s net worth is now estimated at $11 billion.

In the end, Kaufman pronounces a decidedly mixed verdict on the Sassoons and the Kadoories.

“Both families were the beneficiaries of empire and colonialism. The opium trade that was the foundation of the Sassoon fortune had destroyed the lives of millions. The fortunes made by the Sassoons and the Kadoories were built on low wages and unfair competition. They exacerbated inequality that left Chinese dying in the streets of Shanghai.”

They did all this as they danced the nights away in their palaces and lived glittering lives. In so doing, and unintentionally, “They fueled the rise of the Communist Party and its triumph.”

There were also positive outcomes.

“The Sassoons and the Kadoories exploited Shanghai, but they also ignited an economic boom as China wrenched itself from a sclerotic, feudal society into a modern industrial one.”

In the end, however, “It was the Chinese who transformed Shanghai and China,” although, Kaufman says, the two Jewish dynasties “help[ed] light the fuse.”

Today, all that remains of the Sassoon and Kadoorie kingdoms in Shanghai are artifacts, scattered historical plaques, some portraits in one of their fabled hotels, and the Shanghai Jewish Refugees Museum and a walking tour of the former Jewish Ghetto.

Journalist and author Mark I. Pinsky worked as an editorial advisor for the Xinhua (New China) News Agency in Beijing in 1982 and 1983.