The Last Interview: A Novel 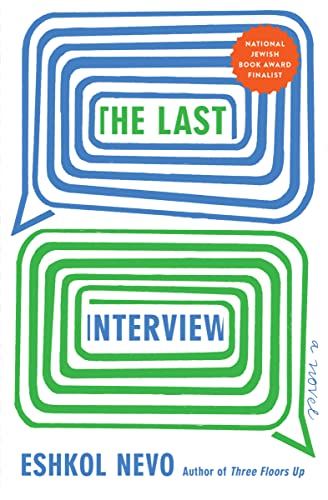 Midway through Eshkol Nevo’s The Last Interview, the narrator—who may or may not be Nevo himself, an uncertainty Nevo may or may not want his readers to entertain—slyly explains the ruse of the book. “I was supposed to be writing a novel . . . Instead, I’m writing answers to (an) interview, which is based on ‘a selection of . . . questions’ that the editor of an Internet site passed on to me.” It’s something of a self-blurb arranged in the hall of mirrors that is The Last Interview, a novel at least as much about the conceits of fiction itself as it is about the regrets and resolve of the book’s narrator.

Nevo is a bestselling author in his native Israel, and so it’s impossible to believe he’s not, in most respects, the character we follow throughout the book. We see him getting grilled about his country’s politics while on tour; we find him anxious over crossing the “Green Line” to deliver a lecture in an Israeli settlement. And we encounter, among much else in the kaleidoscope of reflections the novel comprises, his failed loves, the friends he’s betrayed, the children he obsesses over, and ruminations on everything from fame and posterity to pop music and basketball. It’s a discursive trek.

The narrator, however, asserts his unreliability so often that the inherent uncertainty of any instance of narrative—the treating of experience as raw material to be transmuted—begins to hold more primacy than the recountings themselves. “Sometimes I wrote things that happened . . . and sometimes I made up things that didn’t happen,” we learn. “I noticed that I enjoyed writing the made-up things more . . . I’ve become a liar . . . an obsessive storyteller . . .  (E)verything that happens is food for my stories.” The novel stutters ever-onward through prose alternately opaque and transparent: Nevo continually invites us to contemplate if he himself is hiding behind the curtain, even while he’s letting us know how tired and futile such scrutiny is.

All is filtered through the device of an interview. The entire novel is an extended Q&A, with questions ostensibly posed by an online publication and the narrator responding to them. Many of the queries, particularly in the early going, are of the sort any author would expect to field, online or in-person (“Did you always know you would be a writer?” “What does your workday actually look like?” “Where do you write?”). Oddities crop up: “Do you believe in God?” or “Is it possible to live without love?” The unavoidable suspicion is that the narrator has concocted the entire thing. “This whole interview—to confess the truth—is an attempt to deal with writer’s block in a different text,” he tells us, an insistence on “truth” that’s only half-convincing. But then, that may be the point.

The narrator responds to the spray of questions by veering often into the deeply personal and specific, as though he’s addressing his analyst and not an audience. His answers ramble, meander, expand. Some begin as clichés and then morph into commentary on clichés; many questions go unanswered in large degree. The narrator reveals much about himself—an affair, for instance, that may have existed only in his imagination—by seeming to speculate on the plausibility of events, their potentiality. He bounces between detached objectivity and apparently genuine emotion, though always with hints of the performative, as though he’s unable to review the events of his life without appointing himself at once lead actor and director.

A conjunction of personal traumas harries the narrator, providing the semblance of a plot. The erosion of his marriage, the wasting illness of a dear friend, and a growing estrangement from his oldest daughter all consume him—and, not so incidentally, have led him to seek creative relief in answering interview questions. And so he fabricates by way of outpacing the frustrations of writing—or perhaps not. Nearly every answer he offers may hold a germ of truth—each might also simply demonstrate how easy it is to persuade one’s self of the mutability of experience: “(T)he more I ‘lie’ in biographical terms, the closer I actually get to the deep truth that is beyond the facts.”

The insistence on the untrustworthiness of the writer and what he writes, as well as the endless reminders that words can transfigure—even hijack—both memory and experience may weary some readers. The novel, though, is undeniably engaging and often authentically moving—as incoherent as that might seem in such a self-consciously layered work. “The truth,” we’re told, “is that I ought to end this entire interview. But I can’t. I have nothing else to hold on to these days.” If there’s something to believe in here, maybe this is it.