The Last Hunger Season: A Year in an African Farm Community on the Brink of Change 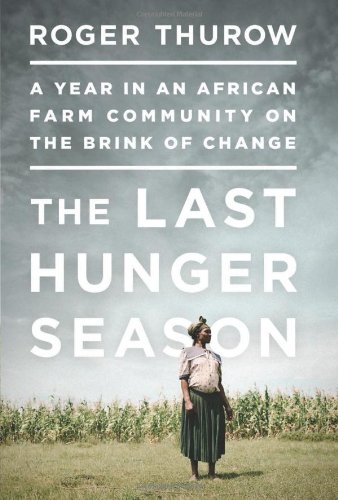 An acre of land, sometimes two, normally only half. That is what Kenyan smallholder farmers, the majority of them women, can boast of.

In order to obtain a minimum supply of medicine (to fight recurrent bouts of malaria) and cover education costs for children (a chance to escape poverty), the maize is routinely sold shortly after harvesting when prices are lowest.

A few months later, the little money left is used to buy food, albeit at much higher prices. Only rarely does this suffice to put off hunger. At the apex of the hunger season children will often live on tea for breakfast and a bowl of rice for dinner.

It is a vicious cycle—or so it appears. But it is possible to break the circle, as demonstrated by the brave women and men of the likes of Leonida, Rasoa, Francis and Zipporah, whose stories Roger Thurow tells in The Last Hunger Season.

It takes a few years for the system to work efficiently and effectively, but improvements are visible already during the first year—hence also the book’s title The Last Hunger Season.

The book documents the lives of three women—Leonida, Rasoa, and Zipporah, and one man, Francis—during their first year after joining the One Acre Fund initiative. We follow Roger Thurow as he documents their efforts to put an end to the misery haunting their families.

We accompany them on their training as they learn how to plant seeds, prepare the land, harvest, and store. We are introduced to their families and get to know the plight of their children when food runs low and disease is roaming.

We agonize with them over too little or too much rain; share their torment when difficult decisions must be made such as buying food or paying education fees; feel their despair when neighbors who are worse off are turned away; and rejoice when the harvest is good. At last, it becomes possible to realize some midterm plans, such as sending another kid to school or buying a cow, a new dress, or a water filter.

Intermingled with the stories of the four Kenyan smallholder farmers, The Last Hunger Season provides background information about the several factors affecting the fight against hunger in Africa from the perspective of the various stakeholders involved:

• the agenda of non-governmental organizations like One Acre Fund;
• the role of government or more often—not least because of corruption—the lack thereof;
• the need for more and better agriculture development programs;
• the gray side of food and humanitarian aid;
• the long-term importance of agricultural research for the development of better and more resistant hybrid seeds;
• lastly, the ways in which training in good agricultural practice should be complemented with trainings in other areas—nutrition, hygiene—and eventually matched by investments in education, health care and infrastructure.

Roger Thurow is a superb storyteller and a skillful reporter. In The Last Hunger Season his principal achievement is to have illustrated not only that change is possible, but also, perhaps more importantly, that its ingredients are simple.

In our high-tech world obsessed with complexity and excess, we tend to forget that the real quantum changes associated with modernization came about through small-scale innovations.

Helping someone to achieve independence is a truism, but a truth nevertheless.

The Last Hunger Season is a must-read book—moving and educational. It is an invitation by Leonida, Rasoa, Francis, and Zipporah to look at their lives, acknowledge their determination to improve their condition, recognize that their aspirations are not different than ours, and help them with know-how—rather than pity.