Last Girl Before Freeway: The Life, Loves, Losses, and Liberation of Joan Rivers 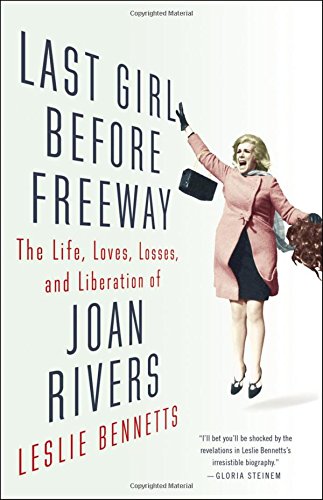 Denied the kind of shapely body and beautiful face that made Hollywood producers see stars, but gifted with a razor-sharp mind and a motor mouth, Joan Alexander Molinsky made the best of her talents and rose to fame as a comedian who dissed women with beautiful faces and shapely bodies. Early in her career, Tony Rivers, an agent, urged her to drop Molinsky because it advertised her Russian Jewish immigrant roots and didn’t advance her career. She borrowed his last name, and, until she died in 2014 at the age of 81, she went by the stage name Joan Rivers.

Caustic, ambitious, and self-deprecating as well as self-aggrandizing, she broke the glass ceiling that had kept women from rising to the top of a profession dominated for decades by men, many of whom, such as Mel Brooks, Carl Reiner, and Sid Caesar, traded on their Jewish ethnicity. Joan Rivers was the first Jewish American woman to become a superstar comedian. Kicking and screaming, she paved the way for contemporary performers like Margaret Cho and Amy Schumer.

Leslie Bennetts’s biography, Last Girl Before Freeway, traces the ups and downs of Rivers’ professional career and her personal life, including her marriages, romances, peccadillos, and vanities. She seemed to be addicted to plastic surgery that sometimes made her look grotesque. Thoroughly researched and eminently readable, Last Girl Before Freeway offers colorful quotations and plenty of four-letters words from Rivers herself on almost every page.

Readers might wonder why not watch reruns of her appearances on TV or read her own words in her own books. After all, between 1974 and 2014, Rivers wrote 12 books, albeit not entirely on her own steam, but rather with help from co-authors who usually remained invisible and anonymous.

Still, she wrote all the gags and the punch lines herself. “For more than thirty years, Rivers kept a paper record of all her jokes on thousands of index cards which she stored in walls of filing cabinets,” Bennett writes. Maybe one day those cards will find their way to the Smithsonian in Washington, D.C. They ought to.

Time and again, as Bennett shows, Rivers exaggerated, embellished, and didn’t tell the truth, especially about her encounters with movie stars. Indeed, it seems likely that she made up stories about her interactions with Barbra Streisand, Elizabeth Taylor, and Marilyn Monroe to puff herself up. Or so Leslie Bennetts persuasively argues.

One of the great strengths of her biography is that it separates fact from fiction and sets the record straight about the Brooklyn-born daughter of a Jewish doctor who graduated from Barnard College, worked with Second City in Chicago, shuttled back and forth from Los Angeles to New York, appeared in films, promoted her own line of jewelry on QVC, and cohosted Joan & Melissa with her own daughter.

The portrait of Joan Rivers that emerges in Last Girl Before Freeway might not make her more endearing to the many fans who watched her on The Tonight Show with Johnny Carson or on The Joan Rivers Show for which she won an Emmy. But it will probably make her more understandable as a daughter, wife, mother, and as a comedian who seemed on the one hand to be a feminist and on the other hand bound by many of the traditional roles for women.

Bennetts interviewed dozens of friends and family members who knew Rivers intimately. She also hunkered down with all the many books and articles about her. The chapters on American comedy and American comedians provide real food for thought, though they might not answer all the questions about who really influenced Rivers, and which male comedians she most closely resembled. As Bennett shows, there’s some Lenny Bruce in Rivers, and some Woody Allen, too. But as Last Girl Before Freeway makes clear she was also one of a kind and in a class by herself.

Perhaps only Howard Stern rivaled her brand of no-holds barred comedy. Shortly after her second husband, Edgar Rosenberg, committed suicide in 1987, Stern said to Rivers herself on the air, “Joan, you are so hot—I can’t believe your husband killed himself!” Without missing a beat, she burst out laughing. Rivers could take it as well as dish it out.

A biography about her also has to be a history of TV from the mid-1960s to the start of the second decade of the 21st century, and this one delivers on that account. Indeed, Last Girl Before Freeway goes behind the scenes at NBC and at Fox and reveals the egos, the power plays, and the relentless drive for ratings. TV made Joan Rivers, and Joan Rivers remade the institution of TV, as Americans had known it, ever since the days of Milton Berle who was described, during the industry’s so-called Golden Age, as “Mr. Television.”

Last Girl Before Freeway is likely to be, for our time, the definitive biography of the woman who was known as “the queen bitch,” a “vulgar comedian,” and a “grande dame.” She will probably be remembered as the woman who made jokes about oral sex, terrorists, and the Holocaust, and who carved out a whole world of humor not only for herself, but for jokesters of every sex, gender, race, and ethnicity.

“If you don’t reinvent yourself, you’re gone,” Bennetts quotes Rivers as saying. Her words apply not only to comedians on stage and in front of the camera, but to the fans who watch them and who laugh with them and at them. As Last Girl Before Freeway shows, behind the money and the fame, the glamor and the stardom, Joan Rivers was one of us, an insecure girl from the Brooklyn who dreamed of rising above her ordinary lot in life.