The Last Flight of Poxl West 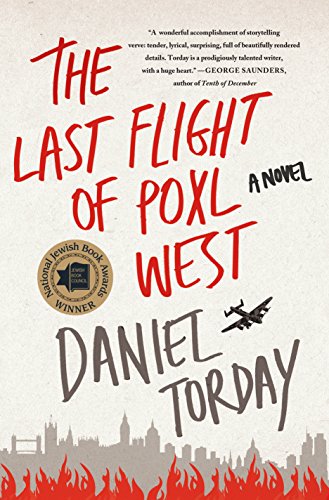 Early in this novel, when Poxl West—the putative author of this supposed World War II memoir—is giving a book reading, an audience member asks, “Mr. West, with all due respect, isn’t it possible we’ve reached a point of saturation with all the first-person accounts of this particular war?”

Seventy years and billions of words after the defeat of Nazi Germany, that is the uncomfortable, rarely voiced question that dogs any new novel about that era. Is the unique evil of the Holocaust sufficient justification for continuing to churn out books about it?

When the writing, plot, characters or theme are sufficiently compelling, the question can be ignored by saying: This isn’t just another World War II novel—this is a good novel in itself.

The Last Flight of Poxl West is daringly different enough from the canon of Holocaust-themed novels to safely escape the question. Indeed, it offers an ironic challenge to the whole concept of Holocaust fiction.

However, it is marred by a narrative style that too often slips out of its appropriately fussy voice, into heavy-handed clichés and preachiness.

Author Daniel Torday—the director of creative writing at Bryn Mawr College—has found a new angle on the Holocaust by focusing on a rare hero, a Jewish-Czech refugee who becomes an RAF bomber pilot. (The protagonist’s first name is a somewhat tortured diminutive of his given name Leopold, while “West” is the Anglicized version of his original last name, Weisberg.)

Adding a layer of creative complexity, Poxl’s “memoir” is enveloped within a second memoir, the worshipful recollections of a Boston teenager named Eli Goldstein, who is the grandson of a longtime teaching colleague of Poxl’s.

Eli avidly reads and re-reads Poxl’s memoir. He writes a history paper on it; he researches the war obsessively.

Yet he can’t help resenting that his “Uncle Poxl” never sends the autographed copy that he’d promised. Gradually, other doubts creep into the book. The great war hero, for instance, flew only five missions.

Poxl’s sections are generally written in a formal voice that some readers may find too prissy but that is spot-on for an elderly Mitteleuropean gentleman. In the scene where the teenage Poxl discovers his mother having oral sex with a lover, the stilted language is the perfect vehicle for slowly unspooling the son’s awareness:

“I saw my mother next.

“She was on her knees. This is not a position to which I was accustomed to seeing my mother.”

It’s a hard voice to maintain, however, and Torday slips too often. The tone wavers constantly, from refreshing bluntness, to pretentious pronouncements, to lovely metaphors, to simple understatement, to deadly clichés. For instance, Poxl “steeled myself” for revelations, and “my palms began to sweat” (at least three times), but “we were all quite lucky to be alive.”

For a while, The Last Flight of Poxl West seems to cast doubt on the conventional image of World War Two by focusing on Poxl’s qualms about the German civilians who were killed and grotesquely injured by his bombing sorties. Then the novel seems to say that his yearning for his lost love is more important than either his wartime heroics or his guilt.

Finally, in yet one more twist on the Holocaust, the novel undermines Poxl’s unique, heroic memories altogether.

But the reason we keep publishing and reading Holocaust novels is precisely because we must remember.