The Last Emperox (The Interdependency) 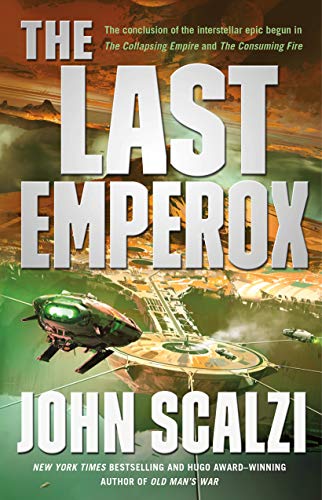 “fans of the series will absolutely delight in the final installation in Scalzi’s epic space opera trilogy.”

The flow streams are collapsing. The Interdependency is crumbling. Billions of lives are on the line, and The Empererox, along with her right-hand woman Kiva Lagos, are done playing nice.

The third and final book in Scalzi’s Interdependency series focuses primarily on Cardenia’s (The Emperox) struggle to save her doomed people while still battling assassination attempts. Everyone is out to save themselves, but the only place in the whole Interdependency that can sustain human life alone is the remote planet of End, whose flow stream only goes one way.

Hope exists in the form of evanescent flow—unstable, erratic flow shoals that appear and disappear seemingly at random. Marce, Cardenia’s boyfriend and mathematician, may be able to sort out the math to move whole colonies of people to End, but stable flow lines are already disappearing, and he needs more time to study the anomalies. And of course, the various noble families remain at each other’s throats, desperate to control an empire that will soon be obsolete.

Nadashe Nohamapetan returns as the serial lead antagonist of the series, plotting and murdering in the most delightful ways. Her arch nemesis, Kiva Lagos (now The Emperox’s right hand woman) remains a most fantastic foil. Where Nadashe plans, Kiva runs headfirst. Where Nadashe charms or intimidates, Kiva curses (to be fair, Kiva always curses). These two women are drawn, fundamentally, to the same goal of financial security and power. Both are brilliant masterminds. And both are so incredibly irritating to the other that every time they are in the same room, the tension is palpable:

And while yes, it is Cardenia that is functionally responsible for a lot of the plot moment in the book, it is Kiva that truly shines as a point of view character. Her crass “indifference” to anything that doesn’t directly affect her is a delight to read, in that she has so much real humanity that she refuses to let shine through.

Although she experiences personal growth through the series—in this book she is attempting an actual relationship with Senia—she maintains that air of “do not f*** with me” that defines her personality. Scalzi gives us numerous beats to cheer her on, as various nobles try to cheat her, kill her, abduct her, etc., just to have her brazen, foul-mouthed confidence keep her on top (which is perhaps why the book’s dedication reads: “To the women who are done with other people’s shit.”).

Part of this joy with Kiva’s character is how well her sexuality is integrated into the narrative. Her relationship with Senia does not exist to titillate, but it does hit narrative beats that feel authentic:

Kiva’s voice, in general, drives the book in a way Cardenia’s does not. Where Cardenia must be outwardly polite due to her position, Kirva is the voice all of us have inside, screaming, when people are being willfully obtuse. Hence, Kiva is the deepest form of wish fulfilment when she delivers lines like,

“It’s a nice, cozy little conspiracy you got going here. Shame if something happened to it.”

“And yet here I am,” Kiva said. “In your office. Telling this extraneous dimwit to fuck off.” She turned her attention to the extraneous dimwit. “What part of ‘fuck off’ aren’t you understanding?”

Although The Last Emperox delivers an efficient wrap up of the problems presented with the collapsing Flow, and the outcomes for Kiva and Cardenia are satisfying, there is still a sense of being rushed. With the even pacing of the first three-quarters of the book, to have so many events coalesce and end within the span of a handful of pages was disappointing. Another 50 or so pages detailing Nadashe’s takedown, and the fallout with the noble families, would have been excellent. However, this is a minor complaint overall, and in no way detracts from the sheer joy of Cardenia and Kiva’s triumphs.

Regardless, the end was satisfying and a well-deserved wrap up for the heroines. The Last Emperox is a well-deserved, cheer-worthy, take that! ending for Kiva and Cardenia, and fans of the series will absolutely delight in the final installation in Scalzi’s epic space opera trilogy.