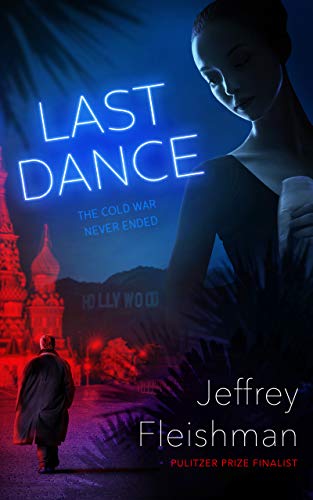 “The story is alive; it breathes; every paragraph brings the reader a sense of being there, of being Carver.”

Better than pulp fiction, close to noir, maybe with a touch of Chandleresque thrown in for good measure—that gives the reader a good start to understanding Last Dance by Jeffrey Fleishman.

Fleishman has created a character in Detective Sam Carver whom we never quite visualize, and yet we know him from the inside out. As he describes himself, “I like to follow a case on my own, to let it seep into me, to go where I am pulled, chase the odd angle, not having to explain or get drawn into things that don’t matter.” And this is exactly how Carver solves his problems.

Life is not simple for Carver, and lots of issues rise throughout his story—the female criminal, Dylan Cross, who got away but never really left him, his mother’s dementia taking her down a dark path that he does not understand, and now a new crime that has more blind alleys than an English maze.

Upon his return from Europe, Carver doesn’t have time to settle in before he is called to the scene of a crime. Katrina Ivanova, a world-famous ballerina, is found dead in her loft apartment in Los Angeles. The scene initially looks like suicide, but there is something gnawing at Carver; something that just doesn’t look right.

Katrina’s body is taken to the morgue for autopsy, and within days, she disappears. Not a good thing for the LAPD.

The search not only for her body, but also for her murderer commences, and yes, everyone is sure it is murder. Carver’s soon to be partner Lily Hernandez, and his boss, Captain Manuel Ortiz, both agree. But without the body and the autopsy, proof is elusive.

Here is where characters begin to run loose and fast—Antonio Garcia is Katrina’s neighbor and good friend and there is writer Michael Paine, solicited by Katrina to write her story. And Levon Sokolov, a cellist who played for Katrina becomes a person of interest—was there more of a relationship than just music? The characters and bodies pile up. When Carver begins to close in on Sokolov as a possible suspect, the cellist turns up dead.

And life for Carver becomes even more difficult when he learns that Katrina kept diaries about the people in her life, and like her body, the diaries are nowhere to be found.

The story starts to turn when FBI Special Agent Azadeh Nazari enters the scene, hinting that there might be more to Katrina’s death than just local talent. Two Russians were known to be pursuing her, but to what end?

Enter Stefan Petrovic, a contact who appears on the scene, unannounced, and happens to know more about Katrina than he is willing to share—at least not at his initial meeting with Carver.

And now the international side of Katrina’s story begins to open up when Stefan takes Carver on an international journey where he meets Zhanna Smirnov. An older woman of means, Carver learns that Zhanna is Katrina’s aunt. The relationship between Katrina and her mother Maria was a difficult one for unknown reasons, but those reasons could have led to her death. Zhanna filled the gap left vacant by Katrina’s mother.

Carver continues to follow leads, both national and international, and he runs afoul of Azadeh when his leads take him to Mikhail (Mickey) Orlov. The FBI is following Orlov, intent on proving his connection to hacking the 2016 American elections for the Russians and Azadeh sees Carver as interfering.

Orlov is an older man, in his sixties, a wealthy movie producer whose connection to Katrina is through her mother. There is a sense that Maria is high up in the Putin regime, which begs the question about spies in Katrina’s life, especially her mother. Another reason for her death?

Not to be a spoiler, it goes without saying that clues come and go in the form of people whose relationships with Katrina or knowledge about her life create more questions about why she was killed and why her body was taken, than they give answers. And yet the clues begin to add up as the story gains steam.

As with all good thrillers, at the end, Last Dance throws out all the red herrings, ties up the loose ends, and sets the story for the next in the Sam Carver series.

Fleishman’s writing style is reminiscent of the 1940s style of the likes of Raymond Chandler, and yet Fleishman seems to take it one step further. The story is alive; it breathes; every paragraph brings the reader a sense of being there, of being Carver.  Fleishman’s writing in the first person ensures that the reader is always in Carver’s mind.