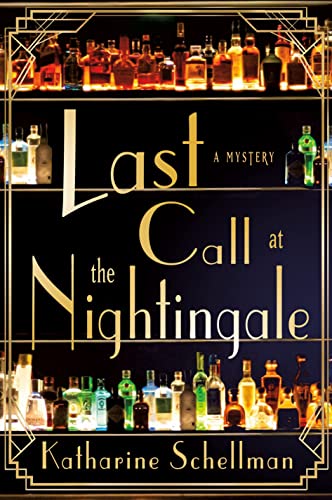 “Schellman’s fans will, no doubt, like Last Call at the Nightingale in spite of it not being her best story.”

Katharine Schellman’s newest mystery, Last Call at the Nightingale is set in 1920s prohibition New York. A time of law breaking, mobsters, and corrupt police—certainly a good era for a good mystery.

Schellman’s protagonist, Vivian Kelly, is a seamstress by day, a speakeasy visitor by night, much to the chagrin of her sister Florence. Schellman establishes a strong tension and conflict between the sisters who both work for a seamstress whose demands weigh heavily on Vivian. In spite of their conflict, the sisters love each other and work hard to get past the negatives in their lives.

At the Nightingale speakeasy, Vivian is a patron who is liked by everyone, especially the owner, Honor Huxley. Perhaps Vivian is liked a little too much by Honor, but Vivian tolerates the extra attention as she gets free drinks and a chance to dance her worries away.

And her worries double when she and her friend Bea, a waitress at the Nightingale, discover the dead body of a wealthy man in the alley behind the speakeasy. Honor takes care of the situation, but Vivian can’t let the image leave her mind and she sets out to discover who the murdered man is, who took his life, and why.

Here Schellman brings in new characters, in particular, Leo Green begins to frequent the speakeasy and is especially drawn to Vivian. Honor approaches Vivian and asks her to learn more abut Leo—who he is, why he is there, and what his goal is with Vivian. Honor likes to know everything about anyone who enters her pub.

And even though their relationship begins to warm up, Vivian discovers that Leo is a mysterious man who is adept at avoiding the obvious—answering her questions.

As the story progresses, Vivian learns that the murdered man is Willard Wilson, a well-to-do bootlegger. Vivian’s life begins to take a spill when she is approached by two thugs demanding to know what she knows about who killed Willard. She is conveniently saved by Danny Chin, the bartender at the Nightingale.

Although Schellman does a good job of putting Vivian in danger, it seems that there is always some convenient hero to step in and save her. She seldom, if ever, gets out of Schellman’s predicaments on her own.

The premise that Schellman has devised holds water, but the pacing is difficult, and at times the writing is choppy. This is not a story that moves quickly, in spite of the plot.

Regardless of the choppy pacing, Schellman has developed good characters and a good storyline. As Vivian uncovers more and more information about Willard Wilson and delves into his background, his marriage, and some of his ugly proclivities, she places herself in numerous dangerous positions, thus ramping up the tension in the story.

The requisite climactic scene where Vivian is confronted by the supposed bad guy is well defined and exciting, but the fact that there is still more to come gives the ending a good twist.