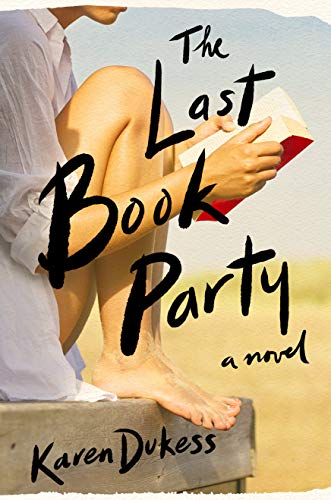 “Karen Dukess draws the world of the New York literary scene in the 1980s—and the landscape its players inhabit—so vividly that readers will imagine they have experienced every glittering moment . . .”

Eve Rosen, a 25-year-old aspiring writer, originally takes a job as a low-level assistant at a publishing house believing that she will gain exposure to the world she wants to become a part of. The only problem? She can’t seem to finish a story. Eve has been brought up to believe that gifts are bequeathed, that talent is something one has—or does not have—automatically. A gift for math, for instance, has been bestowed upon her brilliant brother Danny, leading Eve to believe, at times, that hard work matters little and she simply hasn’t been chosen for the life she desires.

Although her family has a home in the lovely Cape Cod beach of Truro, they have never been a part of the glittering literary circle that houses some of New York’s most esteemed writers, including Henry Gray, a legendary New Yorker writer, and his poet wife, Tillie, who is beginning her own meteoric rise to success.

Throughout the course of the night, Eve has a run-in with Henry and Tillie’s son, Franny, which, back in the city, leads to a connection with his friend Jeremy, a debut novelist being published by the publishing house where Eve works. Even though Jeremy and Eve don’t particularly warm to each other, his link to the world that has so charmed her keeps her dreaming of the night she can’t seem to forget. And, despite their differences, the one thing Eve and Jeremy can agree on is that the Gray family has a particular kind of draw that is impossible to escape.

Completely taken with the glamorous yet free-spirited literary world in Truro, Eve, back in the city, decides she wants to jump in with both feet. Almost on a whim, she quits her publishing job to become Henry Gray’s research assistant in hopes that she will learn from him. As a result, Eve is invited to Henry and Tillie’s fabled end of summer “Book Party,” a festive affair in which all guests are asked to dress as literary characters and the person who guesses them all first (always Henry) is pronounced the winner.

One of Eve’s primary responsibilities becomes helping with the party and, as it draws closer, everything begins to change. She realizes that what she came back to Truro seeking doesn’t even remotely resemble what she found. Becoming the trusted advisor of Henry, never quite connecting with Tillie, and finding herself within orbit of many of the couple’s friends teaches Eve more than she ever could have imagined—and none of it is what she expected. That formative summer sets Eve on her path, leaving her with the knowledge that nothing is ever as it seems.

A true bildungsroman, The Last Book Party weaves a tale of mistakes, ambition, secrecy and coming to terms with the fact that life will unfold in its own way, in its own time. Karen Dukess draws the world of the New York literary scene in the 1980s—and the landscape its players inhabit—so vividly that readers will imagine they have experienced every glittering moment right along with Eve.