The Last Battle: When U.S. and German Soldiers Joined Forces in the Waning Hours of World War II in Europe 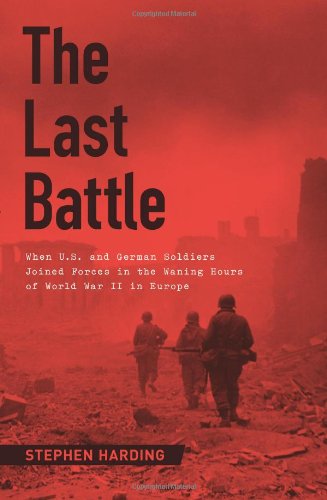 Stephen Harding is senior editor of Military History and a prolific researcher and military historian whose works include seven other nonfiction books as well as hundreds of magazine articles.

Mr. Harding’s most recent offering is The Last Battle, a relatively brief work derived from the author’s tightly focused investigation, the sources for which include a collection of primary source documents available in the National Archives and Records Administration’s Modern Military Records Center in College Park, Maryland, as well as the transcripts of his interviews with those American participants in the events still living in 2011–2012.

It is commonplace for many of us to call attention to the unique and surprising nature of particular events by suggesting that even a Hollywood screenwriter would have difficulty conjuring them. The story related by Stephen Harding in The Last Battle is such a tale.

Its setting is a picturesque Austrian village nestled in mountainous terrain and in particular the town’s ancient fortress, Schloss Itter. Though many hundreds of years old, the castle is nonetheless stout, strategically well placed. And if its walls were not capable of long withstanding the attention of modern artillery, they were certainly up to the task of absorbing a great deal of small-arms fire while providing the castle’s defenders with the advantage of height.

Even more interesting than Schloss Itter itself are its wartime inhabitants. These are what Mr. Harding often calls “French VIPs,” in this case a number of French soldiers and politicians whose stars had shone most brightly during the interwar period.

Among them were former prime minister Edouard Daladier, who had the misfortune to be in office as both a signatory of the Munich Agreement and a bystander while Hitler disregarded it by invading Poland in September 1939; General Maurice Gamelin, former chief of the French General Staff and his successor General Maxime Weygand, who presided over the dismantling of the French Army by the Wehrmacht; Marie-Agnes Cailliau, the older sister of Free French General Charles de Gaulle; and Michel Clemenceau, son of the pugnacious former premier Georges Clemenceau.

In addition to these luminaries, there were several other “French VIPs” of various backgrounds, personalities, and political persuasions, all of whom produced a prickly, contentious atmosphere that could not but enhance the malaise generally brought about by imprisonment.

But there were other actors in the story, both American and German.

The most important American was the undisputed hero of the piece, Captain John C. “Jack” Lee Jr., a company commander in the 23rd Tank Battalion, 12th Armored Division.

On the German side there were both villains and heroes. Foremost among the first group was SS Captain Sebastian Wimmer, whom Mr. Harding describes as a drunken, unprincipled and brutish officer. Wimmer’s demeanor, in fact, resulted in his dismissal as a company officer from the ranks of the 3rd SS Panzer Division Totenkopf, a unit commanded by the notorious SS Major General Theodor Eicke, lately the head of the entire concentration camp apparatus.

There were, finally, two German officers who chose to defend the French VIPs with their lives. These were the Austrian-born Army Major Josef “Sepp” Gangl and his Waffen SS colleague SS Captain Kurt-Siegfried Schrader. Both of these men were combat veterans whose decorations testified to their bravery.

The “plot” of The Last Battle is prototypical, although the author’s telling of it is well done and eminently readable. In general what we have here is the fearless, cigar-chomping American citizen-soldier (Lee) who, when given the assignment to rescue the innocent Frenchmen from the clutches of their dissolute and unpredictable German captors, accepts his orders with enthusiasm and carries them out with aplomb.

The twist, of course, is that in this case we have Germans who are “good guys” (Schrader and Gangl) and Germans who are “bad guys” (Wimmer and his SS comrades), a confusing situation to say the least. What must have been most disquieting for every soldier involved, German or American, is that in such an unstable situation where both German and American would be “trigger happy” there must have been a persuasive and obstinate desire to avoid having the distinction of being the last soldier in the European theater to be killed in action.

What is best about The Last Battle, however, is that author Harding skillfully turns the reader away from fixation on the book’s predictable plot and characters. He does this by engaging the reader in a number of interesting topics in whose absence the book really would be somewhat unsatisfying.

Mr. Harding does this immediately by describing in detail the history of Schloss Itter and its surroundings, from the founding of the fortress in ninth and tenth century, to its heyday in the late middle ages, and finally to its dissipation into the realm of the “tourist trap” during the 19th and 20th centuries. He does the same thing with regard to the backgrounds of most of the French VIPs who began to populate the Schloss Itter in 1943.

The reasonable person might ask why the French VIPs involved came to be in their situation in the first place. The answer to this question, though not much dwelt upon by the author, is that the Reichsfuehrer SS Heinrich Himmler, sensing accurately that the fortunes of war had now turned against the Third Reich, acquired the fortress in the spring of 1943 with a view to converting it into a prison for Daladier, Weygand, and their colleagues.

In the event that Himmler should fall into enemy hands alive, he would (successfully in his view) barter the French VIPs to the Allies in return for his own immunity from prosecution and transportation to more simpatico surroundings, such as Argentina.

Of particular interest to both the casual reader and those whose lives are consumed by their obsession with the Second World War are the little vignettes in Mr. Harding’s narrative describing the personal interaction between enemies, as well as between jailer and the jailed, under the unusual circumstances of warfare.

Captain Lee, having been formally acquainted with Captain Schrader and Major Gangl (who outranked Lee), immediately assumes command of them and their troops without objection on the part of the Germans, and indeed with their full cooperation.

Marie-Agnes Cailliau and her husband Alfred, after a difficult journey to Schloss Itter, are rudely told by the garrison’s second in command, SS Lieutenant Stefan Otto, that there is no room for them. Marie-Agnes, in fear for her life, shouts “But I am the sister of General DeGaulle.” Otto springs apologetically to her side, offering her his quarters for the night.