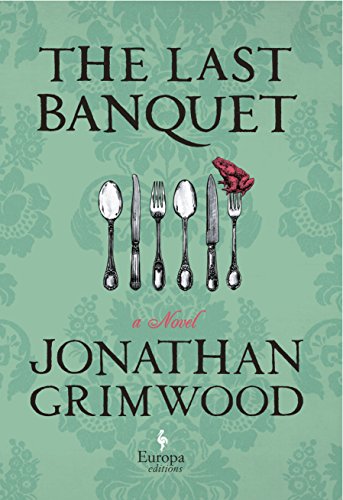 “Our lives are built almost entirely on a foundation of events colliding.”

Who would expect a novel about food and 18th century matters of state to be a page turner? But The Last Banquet is—and it is a tasty repast.

It is bawdy, too. The hero, a picaresque orphan whom we first meet eating stag beetles out of a dung heap, is rescued by a nobleman thus setting off this rags-to-riches story. Within the ramshackle house behind him his parents lie dead—“sleeping” stilly the boy thinks—one touch of color that creates what Anthony Burgess called “an arresting opening.”

Can Mr. Grimwood, a British journalist, keep it up? The answer is largely yes, an admirable feat for a first novel.

Well-chosen details pepper the work. “We walked slowly, because my legs were short and his were bad and it obviously hurt him to walk.” An aptly chosen word paints a scene: “We set off . . . the second animal loaded with wicker panniers,” or “The mossy ruins of a little chapel . . .”

The crunchy stag beetles set off a conceit wherein the young Jean-Marie is determined to taste everything possible. It becomes a lifelong obsession, every new flavor a discovery. Of the Roquefort that his Nobleman rescuer, Le Régent, offers him: “The flesh of the cheese was white and the blue of the veining so deep it belonged to a jewel.”

Readers of historical fiction will smile at how Mr. Grimwood has captured the color and sensual palette of Europe at the start of the French revolution. At table, liveried footmen stand behind each chair. “The Duke wears a wig in the old style, falling to his shoulders.” Mr. Grimwood manages to find the mot juste or aperçu, the brief comment that makes an illuminating or entertaining point.

Jean-Marie corresponds with Voltaire, eventually walks the halls of Versailles as a trusted figure, and receives Benjamin Franklin in 1777. For that to be possible in his adult life he makes lifelong friends with a figure at the military school to which he is sent by the Nobleman. Jean-Marie becomes an expert in gunpowder and explosions––which turns into a rewarding career in munitions.

Even early on he is on hand for a good bit of derring-do. He manages to save a girl’s life twice, ingratiating himself to her influential family. Serendipity leads him into much political intrigue—perhaps too much. By halfway through the book he has stopped a peasant uprising, and become an operative in the French Revolution and the Corsican War of Independence while also at the same time establishing France’s finest zoo and experimenting on which animal intestines make the best condoms.

By this time, the food theme has gotten lost. Mr. Grimwood cites Brillat-Savarin’s famous aphorism, “Tell me what you eat, and I will tell you who you are” without attribution––or perhaps he’s addressing readers whom he assumes will be in the know.

This is also the point at which our hero confronts disappointment. “The truth is taste no longer excited me in the same way. I had eaten everything France had to offer. One pig, one mouse, one owl tastes much like another.”

He has sampled flamingo tongue, snake, pickled wolf’s heart, even a despised schoolmaster’s dog to name a few delicacies that appear on these pages. Holed up at one point in a dank cave he resorts to eating bats raw in order to survive.

In navigating Versailles, its decadence, its stink and stench where dogs and people relieve themselves at will, it is as if Jean-Marie has come back full circle to the dung heap. Here he admits the force of coincidence in shaping a life: “Our lives are built almost entirely on a foundation of events colliding.”

The obsession with food calls to mind a similar obsession that Patrick Susskind toyed with in Perfume. While not derivative, The Last Banquet does owe something to that earlier book as well as to John Lanchester’s The Debt to Pleasure, the latter a gourmand’s romp that features murder by poisonous mushroom. In both books a sympathetic hero gets away with it.

At the end of The Last Banquet the hero simply sums up his fixation: “Discovering new tastes helped convince me I was still alive.”