The Last Ballad: A Novel 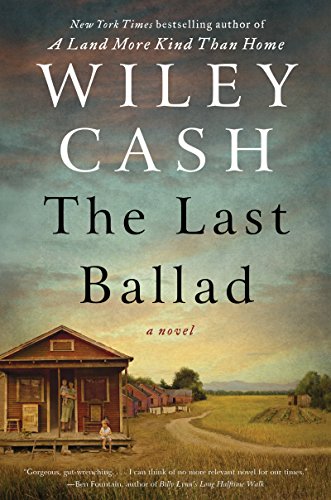 Fate swept reluctant heroine Ella May Wiggins along with the tide of mill unionization in the 1920s. By virtue of her authentic representation of suffering motherhood, coupled with an inspirational, angelic singing voice, she became the accidental spokesperson for the National Textile Workers Union, headquartered in Gastonia, North Carolina. Astonished by her popularity, she saw her name became the rallying cry for hundreds looking for fair labor laws.

In his novel The Last Ballad, Wiley Cash exposes the beating heart of the unionist movement, bringing to life the battle between struggling workers and defiant mill owners. Flashing forward and back, he tells both the fictional and real-life Ella’s story in historical context. His prose educates and moves, deftly juggling fact and fiction.

Ella May’s tale is sadly familiar in pre-labor law America. Carrying the weight of a household of ten on tiny shoulders, left destitute by her husband’s desertion, she struggles to keep bellies fed and bodies sheltered. Heartsick with worry over sick children left home with no adult supervision, of necessity she works a backbreaking, dangerous job in a cloth mill. No regulations on hours or safety, her days are long and grueling. Losing four children to whooping cough in rapid succession, Ella May didn’t know if she’d come home to find her children dead or alive.

Living in the impoverished Stumptown area of Bessemer City, North Carolina, she found interracial friendships exacerbated the hatred of her enemies. Working in American Mill No. 2, the only mill in town to hire both whites and blacks, she and her children saw not color but humanity. In the 1920s South, mixing with other races could get you killed.

Pursued by furious mobs, contorted faces screaming “COMMUNISTS!”, early union proponents feared for their lives. Slipping on gravel roads at high speed to elude pursuers, along with dust stinging their eyes came flying projectiles: bottles, rocks and rotten vegetables. Run off the road, threatened, even killed, they found a ferocious fight for their starving children fueled the courage of their convictions. Ultimately, Ella May Wiggins would become one of those to pay with her life, but not before her inspirational songs and purity of conviction coalesced the unionist movement in North Carolina and beyond.

Wiley Cash possesses a singular gift for portraying the dignity of the poor and downtrodden in poetic language evoking pity and outrage at suffering inflicted on the most vulnerable by the richest. By no means a diatribe, he writes a balanced portrait of rich mill owners both openly vicious and surprisingly sympathetic, stopping short of vilification.

We must never forget our history, even the ugliest—especially the ugliest. How we treat the poorest is a benchmark, the true testament of a country’s morality. The Last Ballad tells a story unjustly neglected, one pivotal in American history, as purely lyrical as Ella May Wiggins’ voice. We ought never forget she gave her life selflessly, nor the wave of change it caused. Wiley Cash’s novel gives testament to this and to a courageous woman.