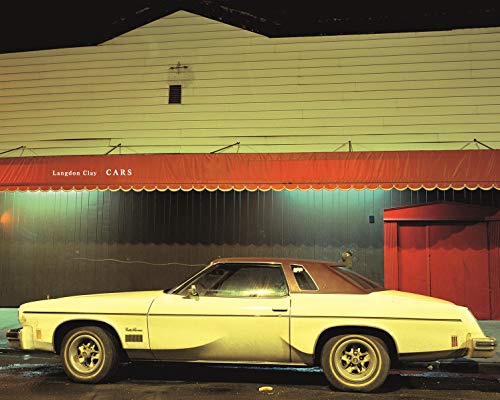 “In America, cars were real estate. They were enormous boats in which you could eat, sleep, make love, change clothes, throw parties, maintain an office, practice unlicensed dentistry—or take your six best friends out for a spin.” Or so Luc Sante rhapsodizes in his foreword to Langdon Clay: Cars: New York City, 1974–1976, by Langdon Clay. The years are pivotal, as Sante explains. Mr. Clay chronicles the cars from “the unreconstructed New York of the era between Fun City 1960s and the land-grab madness of the 1980s.” Each car tells a story, usually a lowbrow tale of battered glory and urban decay.

Clay shot “in Kodachrome with a Leica and deftly lit them with new sodium vapor lights.” Gerhard Steidl, the namesake of the boutique art publisher for Langdon Clay: Cars brings the photos to life, revealing New York in the seventies with precise clarity and vibrant colors. Be they comic books or family photos, paper artifacts from the seventies have faded into a grotesque miasma of browns and oranges. No wonder nostalgia for the seventies became such an easy punchline. Steidl’s expert art direction and layout serve as a much needed corrective.

In the afterword, Clay waxes biographical, reminiscing about his experiences on the film crew for Norman Mailer’s Maidstone. He tells about his influences (Walker Evans, Cartier-Bresson, Robert Frank, Weegee, and others). During his apprentice years he worked hard to slough off the “cornball” edges of his photographs. He later asserted the history of photography fell into two main branches: the impressionist branch and the expressionist branch. He allies himself with the impressionists and tags Cindy Sherman as a member of the expressionists. These personal and theoretical facets help towards explaining the subject matter and technique.

Langdon Clay: Cars affects all the senses. Each vehicle is seen clearly from a single point perspective. The colors are rich and luscious, accentuated by the nighttime setting. Even the ink smells good. Published and printed in Germany, the volume exudes a uniqueness as an art object in itself. In this case, the photographs stand in slight relief to the borders. A difference can actually be felt between photo and border.

A short caption for each photograph is in the back of the book. For example, “Floral designer car, Mercedes sedan, in the Twenties near Broadway, 1976.” The dry informative text stands in contrast to the photograph. The Mercedes looks a bit worn and scuffed, but it is framed by two large floral prints on the side of the building. “Decorative Plant Corp. Office Showroom -136-” are the only signifiers on an otherwise deserted street. In another photo, a maroon Corvette is parked in front of the Everard Baths. Bette Midler used to sing there, but the Baths closed in the 1980s due to the AIDS epidemic.

Steidl’s publishing philosophy involves creating semi-handmade semi-mass produced art books for a general audience. The print runs are larger than industry standard for bespoke art books, but the prices are well within the range of affordability (unlike some of Taschen’s hyper-exclusive editions). A recent New Yorker article delves into greater detail about Steidl’s aesthetic practice.

Langdon Clay’s car photographs capture moments of the past, a freeze frame on a city in perpetual change. Langdon Clay: Cars preserves the fragment in time when wealth and fun gave way to decay and violence. Only a naif would label it a more innocent time, but the mid-seventies evoked here showcase a city in transition and the streets populated with gigantic metal slabs of American automotive expression. These photographs kindle nostalgia and stories. Who drove these huge cars? Why did they park here?