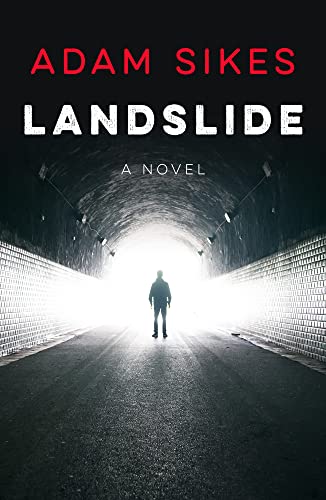 “Sikes has got a good start on a fast-moving series.”

Adam Sikes’ debut mystery thriller Landslide may not be equal to the likes of David Baldacci, Daniel Silva, or John Grisham, (yet) but he’s got a good start on a fast-moving series.

Sikes’ protagonist, Mason Hackett, is an expat American working for a large banking firm in London. He carries military baggage from his time as a Marine in Iraq—issues he can’t seem to get away from. Just as he has buried the worst of times deep in his memory, he watches a news report about a journalist who has gone missing in the Ukraine/Russia area; the picture of the journalist is Mason’s best friend, Kevin Gonzalez, who was killed in Iraq years earlier.

But the man shown in the news report is identified as reporter, Henry Delgado. A possible doppelganger? Mason wonders. If that’s not enough, within a short time Mason receives an email: “If you’re getting this, it means something has gone wrong and I need your help” with a “P.S. Start with Doug.”

And so, the story is off and running, with Mason contacting Doug Mitchell—a pentagon official whom Mason dislikes and distrusts. Doug hears him out and tries to convince him that Gomez is dead, and this is nothing that Mason should be poking his nose into. Of course, any good protagonist is not going to accept that advice.

Thus, the story begins to move across Europe—including “Prague, and again Romania, Moldova, and Ukraine” and extremely close to Russia itself. It does not take long for Mason to realized that he has been tagged and is being followed. Attacks on his person, and threats against an ex-girlfriend become commonplace, and he employs his friend and business driver Ike to remove her to her parents’ house and keep a close eye on her safety.

Sikes does a good job of moving Mason across European borders, but there are times when it’s not entirely clear what his plan is and where, exactly, he is going in order to find Gomez. He knows he needs money to bribe various people, and he has easy access to that. It sometimes feels as though contacts are too easily met.

Along the way, Mason meets numerous characters whom he learns to trust, one character in particular, Alex, provides a small amount of romance and is a well-developed character, and yet the reader is never quite sure if she is to be trusted.

Sikes gets the reader into Mason’s head regarding Alex: “Over the past twelve hours . . . I’d come to feel a sense of familiarity with Alex. Talking with her, even with her feisty borderline combative manner, was refreshing, almost uplifting.” At the end of her role in the story, it is clear that she has done her job in moving Mason one step closer to achieving his goal.

There are a number of fight scenes that Sikes has clearly designed and carried out well. Mason’s experience as a Marine places him in a strong position to defend himself and anyone with him who needs his help.

There are several weapons scenes toward the end of the story that are especially well described and make the reader turn the page quickly not to miss anything.

People die along the way, and one character who is on the right side of Mason’s search, is left in limbo at the end with no explanation as to his whereabouts. Other than that, all loose ends are neatly tied up with a satisfying ending.

In a scene with Delgado, Sikes paints a clear picture of what is happening, “Petrov tore his eyes from the interrogator and looked at the steel door, picturing Delgado on the other side bound to the chair, his head wobbling from the lack of sleep, constant questioning, and leftover pain from the past few days.” The reader understands exactly what is happening to the prisoner.

Sikes drops red herrings and foreshadowing to keep the reader guessing: “On the banks of the river Seine in Paris, Doug said Gomez was going up against the Russians and bad-actor corporations, and moments ago he’d pointed me in the direction of a private military firm doing Moscow’s bidding. And then there was Rick and Zach, suggesting someone connected to Doug’s special Program had been compromised. . . . What the hell had Gomez gotten himself into?” And more people die.

Some items to take issue with include his use of two different points of view—sometimes first person, sometimes third person, and once in a while even second person. It’s apparent that he moves between these POVs in order to give a wider range of focus on events that are occurring outside the protagonist’s experience.

Also, there are experiences that seem almost too convenient. Mason finds himself in an untenable situation and someone appears to save the situation.

Now, having said that, it should be noted that each of these situations are clarified at the end of the story, explaining the sudden appearance of a solution to, or addition to, Mason’s problem.

On the whole, this is a good start to what will surely be an ongoing series. When, at the end, Mason says, ‘“Are you asking me to . . . get [in] on the op with you? There it was, the point of this entire drama—the ask. . . . My hand beneath the table tightened into a fist. “Hell, yeah, I’m in.” It’s clear that Sikes will build his following as another story materializes.