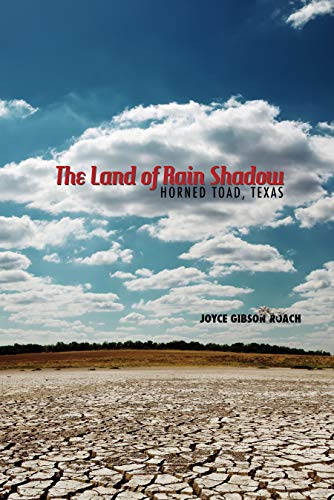 Historian Joyce Gibson Roach chronicles life in the small water-tower town of Horned Toad, Texas, in eight short stories that provide outlanders, those unfamiliar with West Texas, glimpses of the culture and customs of the hardy, stubborn people who choose to live in a land where space is its greatest attribute, tan the predominant color of the landscape, and rain is sparse to nonexistent. When it does rain, it is never quite enough. “It is honest country—doesn’t deceive you with trees, bushes, or shade. There is no place to hide.”

Roach defines her town, symbolic of all small towns in West Texas, in memorial fashion: “With a population round about 3,000, give or take 1,500 or 2,500, the icon is the water tower—water-tower towns—reaching above other buildings, letting those coming from afar know the town has substance, stability, and sustainability.”

The short stories in The Land of Rain Shadow: Horned Toad, Texas, are not in any chronological order, but move back and forth in time, humorous, and sometimes poignant sketches of sincere, occasionally eccentric individuals of different ages and races who share this bare-bones land. They are not always comfortable in their own skins as illustrated in “Just As I Am,” narrated by fourteen-year-old Annie about the Revival in 1938.

“Mid-July to August was the season to gather lukewarm Christians, Backsliders, and New Material into the fold.” Annie doesn’t consider herself as falling into any of those categories, but she never can resist going to the front to rededicate herself to Jesus at the end of each service. She is happy in her religion until that summer when a visiting preacher changes her life with his sermons on hypocrisy. “In just three days, everything went from white to black, from excitement to sick to my stomach.”

The election for county sheriff of 1975, as narrated by Weldon in “In Broad Daylight,” is side-splitting hilarious unless you are or ever have been a resident of a water-tower town. Then you know that while the story of Jesse Earl Putty’s campaign for sheriff is exaggerated, it does illustrate that totally unbelievable politics you sometimes find in water-tower towns. “The only announced candidate said he was going to deal with only one big issue. He was going to try to keep brassieres on all women—at least that’s what he said was his platform when he announced for office.”

Jesse Earl reckons without Joe Don Wheelright, a newcomer to Horned Toad, as he had only lived there for 20 years, and Annie Laurie Rogers, a spinster rancher and one tough woman. “That dirty-little-son-of-a-bitch Jessie Earl is about to be elected sheriff of Caballo County unless one of you sniveling cowards gets some backbone. The very idea, him saying the word brassiere, let alone breasts in public.”

Ms. Roach covers small town Texas patriotism in “The Day After Pearl Harbor,” but in a very different way. Ada, a lady approaching spinsterhood if she has not already arrived, takes advantage of a sale on permanent waves, which were done in 1941 by hooking up curlers to an electrical current. If Vetalou, the beauty operator had not been so upset by the attack on Pearl Harbor, and the fact her brother was in the Navy, Ada would never have sustained her injury. The injury and the brief glimpses of life on the home front are both humorous and poignant.

There is nothing humorous about the last story, “Crucero” translated from the Spanish as Crossroads. Set in 1920, this is one of the few stories told as a third-person narrative. “Jessie Mae knew full well and then some what it meant to be a Negro. It’s how she got beyond her color and became herself that surprised her.”

Jesse Mae can read, write, and cipher, unusual skills for a Negro at that time, but whites are distrustful of an educated black woman. After the deaths of both her children, Jesse Mae and her husband Andrew travel west into the parched spaces of West Texas. The black community at Horned Toad direct them to Crucero Ranch. “There is others out yonder who couldn’t find no place. They might he’p you. They might not.”

They find help and live out their lives against the backdrop of Crucero Ranch, arriving when the ranch is thriving, and find their final resting place in its cemetery, by then the only reminder that once Crucero was a place of hope before predatory land developers bought it. The story is a portent of modern day West Texas, where the number of water-tower towns are diminishing, and grandchildren and great-grandchildren are selling off the land where their hardy ancestors once flourished in their own stubborn, independent way.

Using the regional vernacular of West Texas as it was once spoken, Roach introduces an area almost unknown outside of the Southwest, and does not in eloquent fashion. While many will not appreciate these stories—too colloquial, too exaggerated—fans of regional fiction and humorous tales underpinned by poignancy and history will find The Land of Rain Shadow: Horned Toad, Texas an unexpected treasure.